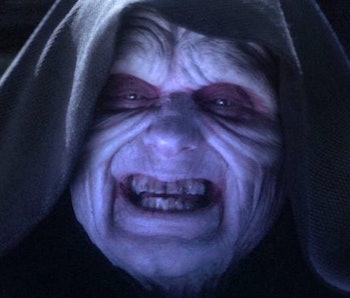 Coruscant is finally returning to the Star Wars spotlight. Despite being the major center of action in the prequels, it seems like Tatooine, not Coruscant, is the trendy location in a post-Mandalorian world. Andor, however, is putting the capital planet back on the galactic map. We get a lot of little glimpses of Coruscant as we follow Mon Mothma’s journey to seek funding for the fledgling Rebellion, but it looks different than what we’ve seen before.

Every time we see Coruscant in the prequels, it looks like a utopia: A busy metropolis under clear blue skies. Even the so-called seedy underbelly looks futuristic and fun, with a night sky full of stars above it. But in Andor, every time we’ve seen Coruscant it’s been as overcast and rainy as an average day in Seattle.

In an intriguing new theory, Redditor u/Mr_rairkim suggests that when Palpatine took charge, he used a weather control device to keep the weather gray and overcast, depressing the population and keeping them docile. And in case you’re wondering, yes, Coruscant has artificial weather (first mentioned in the 2015 James Luceno novel Tarkin). So could this theory be true? Quite possibly. Let’s dive in.

According to Star Wars canon, Coruscant’s entire climate was artificial because of the planet’s small sun, and the tall buildings that pierce the troposphere and create micro-climates across the globe. With an artificial climate, the weather can be beautiful all the time, which is great for the wealthy populace who live in these tall buildings, even if those down in the smog-infested lower levels won’t notice a difference.

So why would anyone even create a “rain” button if sunny conditions are ideal? Well, towering glass-covered skyscrapers may be stately, but they get dirty. The occasional storm would clean all the towers at once, presumably saving the Republic a fortune on whimsical window-cleaning droids.

Now that Palps is in charge, giving Coruscant a Blade Runner vibe would serve a different purpose. In our world, and presumably the Star Wars world too, cold and dark weather inflicts Seasonal Affective Disorder on countless people. Rates of depression increase when it’s gloomy, and Mon Mothma presumably has a SAD therapy light somewhere in that snazzy apartment of hers.

Knowing the diabolical Sith lord, why wouldn’t you keep the weather miserable? He spent decades carefully planning his coup and presumably planned his rule out too. With the potential of rebellion brewing right under his nose, a bit of light psychological warfare could keep his people too bummed out to rise up. Or maybe he just likes whipping up a cup of space tea and looking moodily out the window as he reads his Sith texts.

Either way, if you’re a galactic overlord with a weather machine, you’re going to use it.