Rebel With a Cause

“The old ways hold us” 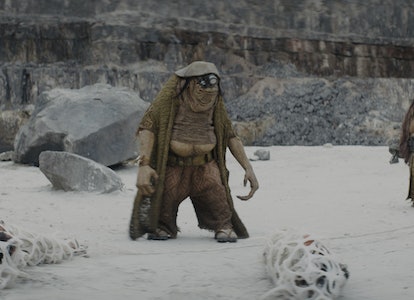 There’s nothing Star Wars likes more than a new creature. From the first appearance of the Jawas to Freck, the star-nosed mole alien from Obi-Wan Kenobi who sounded an awful lot like Zach Braff, introducing an alien is a great way to nab a viewer’s attention and flesh out the galaxy.

Andor takes a new approach to this, and Episode 11 is the perfect example. First, a whole new species was seen on Narkina Five after Melshi and Cassian escaped prison. Then, two other scenes use human characters to show alien practices, a technique that makes the world of Andor feel much more significant.

Early in Episode 11, Andor and Melshi come face to face with two Keredian aliens who speak in broken Basic. Knowing the bounty on the heads of escaped convicts, they capture the duo with sticky nets, but eventually they realize they have more in common with the fugitives than the Empire. “Not much squiggly now. Not much left,” one says, blaming their fishing losses on the prison’s pollution. Cassian makes them realize it’s the Empire that spoiled the water, not the prisoners.

This is a microcosm of how the Rebellion works, as people slowly realize their problems aren’t the fault of a local scapegoat, but the Empire at large. The problem on Morlana isn’t CorpSec, it’s the Empire. The problem on Ferrix isn’t a handful of snooping ISB officers, but the Imperial bureaucracy they work for.

But the key to this scene isn’t the dialogue; it’s the characters. Aliens like these have been few and far between in Andor, which has garnered praise as a grounded spy thriller while making fans wonder where all the other species are. Here, by showing how the Empire affects not only other planets but other creatures, it makes the show’s message all the more relevant.

We also see foreign cultures, and how the Empire has impacted them. Maarva is celebrated as a daughter of Ferrix with the traditional mourning ritual of the culture, where her ashes are mixed into bricks that are added to the town. But her funeral is only allowed to proceed after the Empire issues a permit, which the ISB is using as an excuse to spy on suspected dissidents. It’s a reminder that this is an alien culture, and that the Empire is trying to stomp such cultures out.

On Coruscant, Mon Mothma’s daughter Leida has been getting into the conservative Chandrilan customs of her homeworld, much to her mother’s chagrin. Parents of faraway galaxies aren’t immune to experiencing cultural tensions with the next generation, and those too affect how characters view the ongoing galactic struggle.

These elements seem innocuous, but compared to much of recent Star Wars TV, this episode does wonders for worldbuilding. Creating a rich sci-fi universe means more than just making a fancy alien suit, impressive CGI, and an adorable green baby. It’s about creating species, cultures, and communities that are just as foreign as any creature. Andor is finally showing us that, and the rest of the franchise could learn from it.