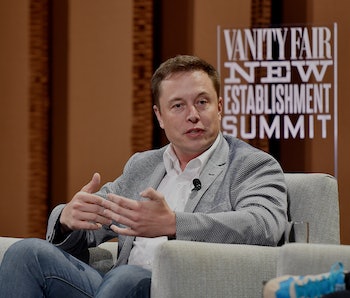 Heavy-hitters in the tech industry, including Tesla’s Elon Musk and former eBay president Jeff Skoll, are lining up behind a new plan to salvage some good for the planet out of the Volkswagen emissions cheating scandal.

The industry leaders think the government should demand that Volkswagen speed up its timeframe for offering zero-emissions automobiles rather than requiring the auto-maker pony up billions in cash to fix cars that are not altogether very fuel efficient even with the proposed expensive upgrades. The proposal was detailed in an open letter to the California Air Resources Board.

As of now, Volkswagen has set aside at least $7 billion in expected profit from this year alone to install new, more fuel-efficient engines in cars discovered to have been cheating emissions tests with so-called “defeat devices” that kicked in during emissions test situations. Considering the inconvenience for owners of being required to trade down to a less powerful engine, many expect a great number of the 11 million-rigged cars to simply be scrapped rather than updated.

Even those cars that receive the upgrade would still be pumping out plenty of “pollutant” CO2 emissions, just as next year’s cars will and the ones after that, reads the call to action:

“A giant sum of money thus will be wasted in attempting to fix cars that cannot all be fixed, and where the fix may be worse than the problem if the cars are crushed well before the end of their useful lives. We, the undersigned, instead encourage the CARB to show leadership in directing VW to “cure the air, not the cars” and reap multiples of what damage has been caused while strongly advancing California’s interests in transitioning to zero-emission vehicles.”

The crux of the techies’ request is that the CARB require Volkswagen to spend what it would have spent on fines and replacement engines on researching, developing and constructing the next generation of zero-emissions cars instead.

The leaders are hoping that California can leverage its position as a major market for Volkswagen’s car to force the company to alter its global sales strategy.

It does seem maybe a little naïve to suggest that California could on its own bring about Volkswagen’s transition to zero-emissions. Of the 11 million cars suspected of cheating emissions standards, fewer than half a million of those were sold in the United States, and California is just one — pretty big — state of 50. CARB would be responsible for levying fines on the company for that share of the cars, but would it be enough to fund much research? Or to build even a single new factory?

It’s probably not the point. Whether or not CARB could bring about zero-emission cars on its own, levying useless fines that may even exacerbate emissions by shortening the road-life of cars, should be reconsidered as a strategy. Similarly, offering payouts to affected consumers may be nice, but it doesn’t address the greater environmental harm done by the scandal. And perhaps once California is pursuing a new direction, other states, or even the federal Environmental Protection Agency, could follow suit, adding some much-needed firepower to the cause.

In fact, the open letter cites EPA action taken to resolve the 1990 trucking industry scandal in which the agency moved up deadlines for tougher standards rather than issue a general recall.

The key point the letter makes is that emissions scandals like Volkswagen’s are the natural result of government standards forcing companies to try to squeeze 21st-century efficiency out of a material as very 20th century as fossil fuels.

Zero-emissions may (hopefully) be the future, but there remain relatively few actual products in the streets. Of course, Elon Musk’s Tesla offers the Model S and Model X (and the coming Model III) electric car, and the Nissan Leaf is the best-selling of the options available.

Volkswagen has been seen as a holdout against the wave of modernization — famously releasing the same Beetle year after year after year. Maybe it’s worth taking advantage of the scandal to push them along the road of progress.