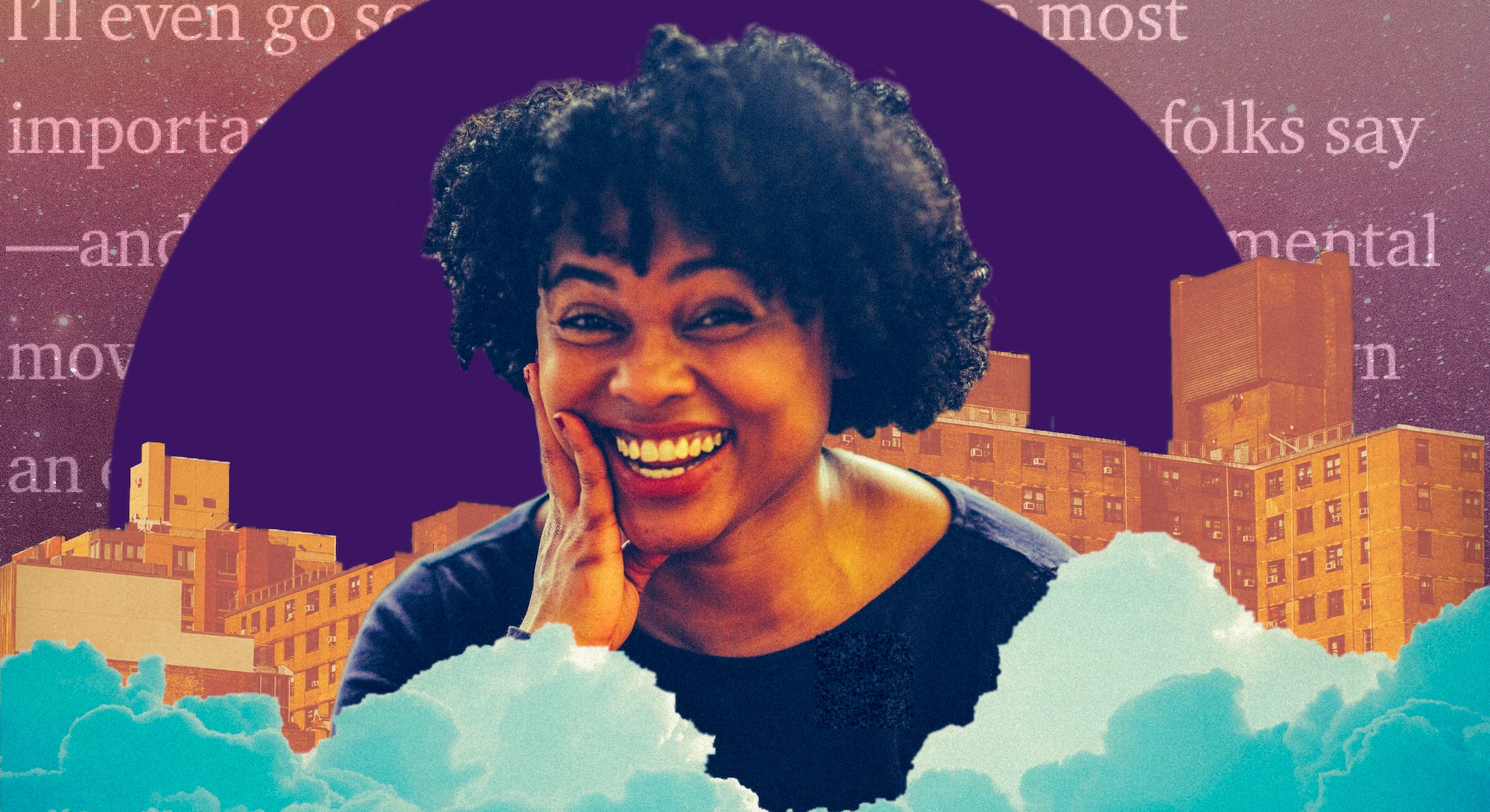 Despite what you may have heard, Mary Annaïse Heglar does care if you recycle.

Sure, you may not personally run a company whose factories are belching greenhouse gases into the atmosphere, but your choices do matter. As a climate justice essayist, she wrestles heavy topics. Among them: the conflict between individual and institutional responsibility, and the role of racism and colonialism in driving climate change.

Mary, as she asked me to call her in this story, channels her inner policy work to write deeply personal essays on how fighting climate change has to include holding the institutions responsible for it accountable. This approach led to her essay, “I work in the environmental movement. I don’t care if you recycle,” published by Vox earlier this summer.

It was this provocative essay that made me blink and put Mary on my radar.

She writes about how strangers, once they learn she works in the environmental field, are overcome with a deep, desperate urge to confess their environmental sins to her at dinner parties. They use non-reusable food containers. They eat meat. They travel by airplane. To Mary, they have been misled about what the climate justice movement needs.

Uniting in the fight against climate change is more about taking collective action against the massive institutions responsible for the bulk of carbon emissions driving climate change and less about people passing an ideological purity test.

"I do need you to give a shit.

The very idea that not adhering to those standards of personal environmentalism disqualifies you from the movement prevents people from building solidarity, and it especially cuts out the communities that have seen the worst of climate change. A clever misdirection by big corporations that individual action was the best way to solve climate change — not, like, those big corporations cutting their fossil fuel use — only clouded the debate.

But Mary cares that you recycle. Of course she does.

“I do care if you recycle,” she tells Inverse. “I do need you to give a shit.”

But what she doesn’t want you to do is think that making slight tweaks to your personal habits will be enough to heal the Earth. Sure, recycling matters, but it won’t let you off the hook.

“I think a lot of people think of it as a one time thing,” Mary says. They think, What can I do about climate change?, and they want to just check a box and be done.”

And while the question What can I do about climate change? isn’t the wrong way of thinking about the issue, she emphasizes that it’s only half right.

“The full question should be, What can I do next?, and always next, because you’re never going to be done. This problem is, if we’re being real with ourselves, it’s never really going to be solved because of how far we’ve gone.”

Attractive as it can be to think that you’ve done your part by switching to compact fluorescent lightbulbs, it’s only part of the solution.

“It has to go beyond your consumption choices,” she says. This includes supporting organizations that are doing environmental advocacy, both financially and actively, as well as getting involved politically to help change the political structure that has built the fossil fueled world. For those who can afford to, keeping their money in banks and investment accounts that don’t invest in the fossil fuel industry can be a meaningful tool.

Activist groups were predominantly white, but it also took the form of a folk song that became an anthem of the environmental movement in the mid-20th century: This Land Is Your Land.

To Mary, it embodied the unconscious bias of a movement that says it’s for everybody yet hasn’t embraced the unique ways that the legacies of racism and colonialism have placed greater burdens on people of color.

So when average people, who are not involved in environmentalism as a career, think that they can’t get involved because they haven’t switched to reusable water bottles or hybrid cars, she tells me this harms the whole movement.

We need an environmental movement that is hospitable to people of color, she says. Part of creating that space is a recognition that not every human on Earth is equally to blame for causing the ongoing climate crisis.

“We need to stop saying shit like, ‘Our ancestors didn’t know what they were doing when they got here.’ Don’t talk about my granddaddy like that! Or his grandfather, who was a slave,” she says. “Like, how dare you.”

“I am the first generation in my family that didn’t live under Jim Crow,” she adds. “We just got here, and now you’re telling me I got to get comfortable with dying a fiery death and that my ancestors are responsible for it?”

To cultivate this consciousness, she uses her writing. Her job may have given her the expertise to be a climate justice essayist, but her personal experiences gave her the voice.

In her day job as publications director for the NRDC, Mary learned what the realities of fossil fuel extraction look like in practice. When she learned about tar sands, for instance, she learned about how hazardous to human and environmental health every step of the process is, from extraction, transport, and refining, to consumption.

She recounts how, when she learned that transporting tar sands to refineries from Canada to the US’s Gulf Coast involved building pipelines through the US or transporting the notoriously dirty fossil fuel source over a thousand miles by train across populated areas, she called up a scientist, saying, “You’re telling me they really want to do this? Like they know this, they know how dangerous this is, and they really want to do this?”

As Mary learned more about the stakes of climate change, she noticed that something was missing from the public conversations about climate change: how it feels.

"We just got here, and now you’re telling me I’ve got to get comfortable with dying a fiery death and that my ancestors are responsible for it?

She moved to Mississippi from Alabama at age 9, but only as an adult did she realize that she’d already lived through the tangible effects of climate change in her youth — events like droughts and hurricanes — that she’d never stitched together in her head.

This realization was like a bubble around her head that suddenly popped.

"I was like, ‘You sneaky bitch!’ I think she knew what she was doing the whole time.

“It was almost like that moment in The Sixth Sense when the guy realizes, ‘Oh, I’m the dead one!’ It was there all along, and he didn’t see it,” she says. “And I think that’s the case for a lot of people right now. Like, if people really thought about it, all of New York would be up in arms because of Sandy.”

This awakening, along with some nudging from a friend, set her on a path to becoming a climate justice essayist.

Mary met Adrianna Quintero when they were both working at NRDC. It was then, Mary jokes, that Quintero tricked her into becoming an essayist. Quintero, who is now the director of diversity, equity, and inclusion at the Energy Foundation, was working on an essay in which she aligned the climate crisis with the #MeToo movement, arguing that the Earth is saying, “Me too.”

“The lack of respect for women that is coming up around the conversation around #MeToo is so reminiscent and symbolic to me of what we’re doing to the planet,” Quintero tells Inverse. “And I really feel that a lot of the behaviors that lead to one lead to the other.”

Then one day, she ran into Mary in the office. They got to talking about the essay, and they discovered that they shared some of the same ideas. Quintero asked for feedback on her draft, and the process snowballed from there.

“She’d be like, ‘That’s a great idea. How about you write that part?’” Mary recalls. Before she knew it, she’d ended up a co-author on the piece.

“And I was like, ‘You sneaky bitch!’ I think she knew what she was doing the whole time,” Mary laughs.

“That’s absolutely true; I did totally trick her,” admits Quintero. “She was thinking she was giving me edits and ideas, but I’m not going to publish this in my name when I know it’s at least 60, 70, 80 percent yours.”

Quintero got just as much out of their collaboration, though.

“If you looked at my original draft, it was going to be a lot less fiery,” she says. “We don’t have time to be timid. We need voices like hers out there, and she encouraged me to be out there,” she adds.

The two have remained in close contact. Even since Quintero left NRDC for the Energy Foundation, they speak regularly about how to push large environmental organizations to embrace and recognize the urgency for greater diversity and equity in the movement.

These ideas, as well as those that the two women shared in their #MeToo collaboration, are emblematic of Mary’s approach to writing about climate justice. Fiery but not bitter, she writes to wake people up, to urge her readers to draw new connections, and to wake up to the reality of climate change, as she once did.

Part of the awakening Mary wants to bring about is to disabuse people of a central misconception many have about climate change — that there’s some big event that’s going to come, some threshold that we’re going to reach. There will be some moment when, suddenly, everyone realizes that climate change has become a huge problem.

“I don’t think that’s true, because I think human beings are adaptable, and we will accept a new normal, and we become dulled,” she says.

The devastation wrought by Hurricane Sandy in 2012 could have been that wake-up moment, but because we are willing and able to adapt, we just accept it.

Despite our slide toward a worsening climate crisis, she’s hopeful that this same capacity to roll with a new reality could serve us as we make systematic changes.

“When I think about the way we live our lives now, which is a huge cause of climate change, having cars and having energy and having lights on all the time, that is a really new development,” she says.

It’s easy to forget that our way of life, with tablets and smartphones and smart fridges, was not the way of life just a generation ago. Part of a collective solution to climate change will be getting used to going without the things we never thought we could.

“It doesn’t take a lot for us to get back to the way we lived before, and I would like that way to not include things like colonialism and slavery,” she says. “That really is how we got there. So if we can go back to before that, I don’t think we need to throw away everything, and I don’t think we can.”

Mary Annaïse Heglar is a member of the Inverse Future 50. You really ought to follow her on Twitter: @MaryHeglar.