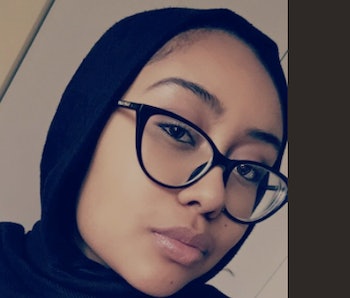 In the early hours of Sunday morning, Nabra Hassanen, a 17-year-old Muslim girl from Fairfax, Virginia, was kidnapped and beaten to death while on her way to a local Muslim community center with a group of friends. But, contrary to those circumstances, Fairfax County authorities say that the murder is not being investigated as a hate crime.

Like many states, Virginia defines a hate crime as any crime “perpetrated because of race, religion, or ethnic origin.” But in two subsequent tweets posted on Monday, the Fairfax County Police Department insisted that Hassanen’s murder was connected to road rage, not a hate crime, although the brutality of the attack and public details of the incident make a good case for it being classified as such.

Here’s what we know: Hassanen was reported missing at around 4 a.m. on Sunday, when she and a group of friends were attacked with a baseball by a masked aggressor who leaped out of his truck after an “altercation” in the street, according to the police. Her body was found in a pond at 3 p.m. the next day. Fairfax County police responding to the missing persons call stopped and arrested 22-year-old Darwin Martinez Torres, who was almost immediately charged with the murder. Officials at Immigrations and Customs Enforcement say that Martinez Torres, a native of El Salvador, may have been in the country illegally.

During the attack Hassanen and her group of friends were wearing abayas, a traditional Muslim garment, and were on their way to the All Dulles Area Muslim Society building after eating an early breakfast at a restaurant — either the McDonalds or IHOP favored by local Muslims after late-night prayers during the holy month of Ramadan. Hassanen’s mother, Sawsan Gazzar, told the Washington Post that her daughter was hit with a metal baseball bat, and that other witnesses said Torres yelled at the group of teens and threw beer bottles at them from his truck.

Police reports say Hassanen was with a group of friends walking and riding bikes toward the ADAMS community center, who scattered when Torres attacked, but witnesses suggested that Hassanen, who did not usually wear traditional Muslim clothing might have tripped on her abaya, a long, loose garment usually work over other clothes. The other teens got away, but said that Hassanen had disappeared.

““I’m sure the guy hit my daughter because she’s Muslim and she was wearing the hijab,” Gazzar told the Post. “The thing in my head is, why did he do that to us? We’re not bad people. He doesn’t know us. Why did he ever do that? I don’t feel safe at all anymore, as a Muslim living here now. I’m so worried about sending my kids out and their coming back as bodies.”

We still don’t know many facts of the case but the FCPD hasn’t given any indication that the case would be reclassified, giving the following statement on Monday.

This tragic case appears to be the result of a road rage incident involving the suspect, who was driving and who is now charged with murder, and a group of teenagers who was walking and riding bikes in and along a roadway.

Nabra’s father, Mohmoud Hassanen, directly disagreed with the FCPD’s statement. “I don’t believe this story,” he told the Guardian. “I tell the detective the same thing.” According to the Guardian, detectives told Mohmoud that the suspect was initially angered by another boy in his daughter’s group who was on a bicycle, but ended up lashing out at Nabra. Again, Mohmoud rejected this: “He killed my daughter because she is Muslim. That’s what I believe. That’s what I told [the detective].”

In a tweet, the Virginia American Civil Liberties Union said Hassanen’s death was “on their radar;” the organization did not immediately respond when asked whether it was investigating the case. Regardless, Hassanen’s death is another example of the way violence against Muslims and Muslim-Americans is characterized by the media and established authorities alike.

On Sunday, a terrorist drove a van through a group of Muslims leaving prayers in the Finsbury Park neighborhood of London. The suspect, Darren Osbourne, was captured alive and taken to the hospital for a “mental health assessment,” and the attack was not immediately branded as terrorism, despite reports that Osbourne shouted “I want to kill all Muslims” after the attack.

Hassanen’s community has set up a crowdfunding page to raise money for her family following the tragedy, which has raised over $184,000 thus far.