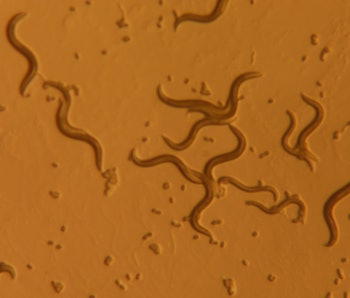 A new attack plan in the fight against cancer may be inspired by the inner workings of nematodes, a recent study suggests.

Researchers working at the Matus Lab at Stony Brook University, New York have published an article in the journal Development Cell titled “Invasive Cell Fate Requires G1 Cell-Cycle Arrest and Histone Deacetylase-Mediated Changes in Gene Expression” — and it describes how similarities between invasive cancer cells in humans and a particular mechanism found with the C. elegans, a roundworm nematode, should be further investigated.

The Stony Brook scientists have suggested that typical cancer treatments might be better aimed at the aforementioned invasive cancer cells—in addition to the malignant cells that divide—which is the tactic behind conventional radiation treatments. The idea with radiation is to damage the genes within cancer cells, making division unworkable.

A different component of the affliction involves the invasive cancer cells spreading past the original point of development and then growing into nearby healthy tissues.

At the Matus lab, the researchers are looking carefully at the C. elegans, especially examining the animal’s uterine-vulval attachment—which at first may seem unrelated, but in fact the process that operates within this particular organ of the nematode shares a cellular behavior with cancer.

Cells known as “anchor cells” are found within the worm’s growing uterus, and for these cells to contact the cells that become egg-laying organ parts, they must actually force through—or invade—a membrane in a similar fashion to how cancer departs from one tissue to form another—then begin to grow. The anchor cells must invade before they divide.

The Stony Brook research team, recognizing this similarity, is building continued research on this front, which they hope may lead to a way to test cancer cells and affect the way they too invade. Lead author of the article Dr. David Q. Matus, Assistant Professor in the Department of Biochemistry & Cell Biology at Stony Brook University, told the college’s website that “Our finding changes how we think about cancer to some level…While it will remain important to target dividing cells – as cancer is a disease of uncontrolled cell division – we need to figure out how to target non-dividing cells too since they are the invasive ones.”