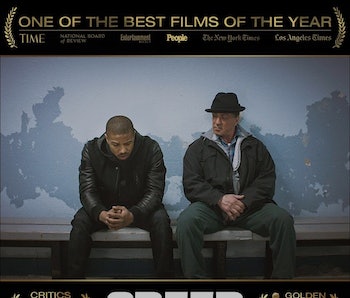 Director Ryan Coogler’s boxing drama, and semi-sequel to Rocky is an unequivocal hit. It’s made upwards of $100 million at the box office and is a huge hit with critics. We even think it has enough clout to be nominated for and win Best Picture at the Oscars this year. So it’s no surprise that movie studio MGM would want to carry on with the retooled franchise for another round. But an exclusive from Variety suggests that the ideas they and executive producer and co-star Sylvester Stallone have cooking for the sequel deserved to be knocked out.

The trade magazine caught up with MGM CEO Gary Barber, who told them, “There’s no doubt that we’re making a Creed 2,” so it’s just a matter of time, but not much is known about specifics. Coogler just signed up to direct Marvel’s Black Panther, and with time working against the franchise’s aging stars like Stallone it seems like waiting the two-to-three years or so it’ll take to make that movie doesn’t make his return very likely.

Stallone admitted to Variety that he and Coogler have tossed around ideas for how to continue the story with Coogler potentially producing. “Ryan has some ideas of going forward and backward and actually seeing Rocky and Apollo together,” Stallone explained. “Think of The Godfather 2. That’s what he was thinking of, which was kind of ambitious.”

Ambitious? Yes. Smart? Hell no. The whole idea behind the themes of Creed was that Carl Weathers’ character Apollo Creed was dead and gone. He wasn’t a man anymore, but a symbol that his son Adonis had to learn to accept and then overtake. Bringing him back would undercut how powerful the scenes in the movie and Michael B. Jordan’s performance in Creed truly are.

Plus, 2016 Stallone and Carl Weathers do not look like the juiced-up 1985 Stallone and Weathers. Bringing them back in flashbacks would make it painfully obvious. See for yourself.

Here they are now:

When Variety asked Jordan even he knew that the idea was absurd. “So it’s going to be a CGI-version of Sly?” he said.

But a more linear story picking up where Creed left off seems like the best choice, and it’s one of the options Stallone and Coogler have considered.

“You’ll have him face a different opponent, which I would say is a more ferocious, big Russian,” Stallone said, seemingly referencing Rocky IV’s Ivan Drago. “You can start to meld my experiences and then you start to bring different cultures into it. And you can see what’s happening with the Russians today in America.”

As far as the ideas for a Creed 2 go, if they keep the focus on Adonis the story will only get stronger and stronger.