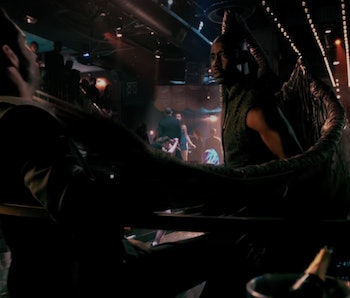 Science fiction programming, especially of the thrilling and frightening variety, has become so mainstream that even SyFy decided to get re-involved. Get it? Because they weren’t making sci-fi for years there, and were instead making awkward CGI mistakes?

FOX, USA, and Hulu have committed to this aesthetic too, perhaps looking for some of the success AMC has found with The Walking Dead. Speaking of, 2016’s winter line-up of spooky programming has to start with what we know works.

The second half of Season 6 will yield a new villain in Negan, and, probably, the death of several characters in Rick’s posse, including at least one of the inner circle. Though the show’s quality has fluctuated in the last few seasons, the first half of the sixth season was one of its stronger runs. When Negan takes center stage in February, it will electrify The Walking Dead in a way it hasn’t been since the Governor showed up at the prison with a tank.

The executive producer behind LOST (but also behind The Strain…) is proud to present Sawyer vs Aliens, vs Other People on USA.

The promotional materials for Colony tell the story of a family separated during an alien invasion. After the aliens settle in and find humans to do their bidding, said family decides acting with the insurgency is the only way to discover what happened to their missing son. Once the rebellion is under way, the father figure is captured by the humans who call aliens their “hosts”, and he is pressured into becoming a double agent, presumably with the promise that he’ll see his son again.

The trailer is rife with that ominous Inception-style sound, and it seems most of the tension in the show will be the slow reveal of the aliens controlling human society. What do they look like? What have they done with this important young boy? Here’s hoping the answers involve something really creepy.

It’s really more fantasy than sci-fi, but Lucifer still begs commentary for trying, yet again, to blend the supernatural with the work of the police force.

It appears that Neil Gaiman’s Lucifer, derived from a minor character in the Sandman comics, is helping a blonde, female cop for some reason. Though the show has already received critical scrutiny for glamorizing the Judeo-Christian character meant to represent pure evil, it looks like it should be criticized for looking cheesy. This is a disappointment, as Lucifer in Neil Gaiman’s comics is way more intriguing than this Once Upon a Time fairytale-style rendering.

Neil Gaiman’s Lucifer, in the Sandman comics, is based on images of young David Bowie, and one of his characterizing traits is being creepily stoic, detached from both the lives of humans and the meddling of other immortal beings like Dream (or, the Sandman). Fox’s Lucifer just looks like an aging trust fund dude, a jerk one would avoid talking to at a bar, rather than an embodiment of power and evil.

Although some critics are, as mentioned, upset about the prospect of making the devil look cool, it appears the Fox series hasn’t even succeeded with that thus far. If anything, they’ve just made the devil look like a guy who vapes and enjoys trimming his facial hair.

Describing Hulu’s upcoming drama in one sentence is difficult; the eight-part mini series 11.22.63, based on Stephen King’s bestselling novel and executive produced by J.J. Abrams, will follow James Franco playing a teacher who time travels back into the 1960s in order to stop Lee Harvey Oswald from killing President Kennedy. Also, Chris Cooper plays Franco’s mentor, who harbors the time traveling wormhole in the back of his diner, and the miniseries is written by one of the former writers on Friday Night Lights. Got all of that?

It’s a bit too early to speculate about the show’s quality — the only available teaser is thirty seconds long — but it bears mentioning that Stephen King is only operating as a suspense author here, employing his gift for world-building but not his more famous penchant for scares. Though 11.22.63 won’t be a horror story about the Kennedy assassination, it will probably be one of the more suspenseful television programs to premiere in the next couple months.

We’ve analyzed the promotional releases for the upcoming mini series return to the X Files, and the show actually looks better than the two films that followed the original drama. We’ve even compiled a list of original episodes viewers ought to watch before diving back into the world of Mulder and Scully.

Joel McHale narrates the series’ trailer, which suggests his role as a conservative talk show host will prove to be pretty important. Let’s be honest, even if the show is terrible, most of us are going to check it out, fueled on pure nostalgia alone.

The good news is, everything leading the X Files’ special to fruition has looked exciting, and the team has confirmed that the six-episode run will pay homage to both the comedic and horror tropes that threaded through the original series.

It’s my personal opinion that the CW’s iZombie is a damn near perfect show. Peppered with truly funny dialogue, the show has all the panache of a great teen sitcom but doesn’t shy away from the gorier aspects of being a show about an undead girl. Even the police procedural stuff, and the mystery-of-the-week aspects don’t feel stale. iZombie’s return to its second season this January promises to crack the plot wide open, switching up anti-heroes for new villains and delving into a dungeon of undead that’s been lurking in the background all season. If ever there was a good time to catch up with iZombie and get on board, this is it.

More like this
Culture
November 29, 2022
Ellen Ripley deserved better than Alien Resurrection
By Josh Bell
Science
Dec. 7, 2022
This ecologist has an audacious plan to build forests on Mars — here’s how
By Kiona Smith
Science
November 26, 2022
Is reality a simulation?
By The Conversation and Melvin M. Vopson
Share: