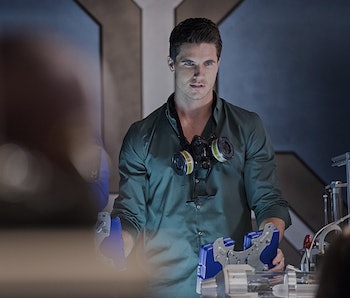 Actor Robbie Amell will return this season on The CW’s The Flash, reprising his role as Ronnie Raymond. Kinda. This time, he’ll be Ronnie Raymond of Earth-Two, who is in fact the villainous Deathstorm.

In an exclusive with Entertainment Weekly, executive producer Andrew Kreisberg said Amell will guest star as Ronnie Raymond from a parallel Earth, which has been a major source of the show’s antagonists this season. “We are beyond excited to have Robbie back on The Flash,” he said. “You can’t keep a good Firestorm down. Only this time, he’s back with a twist, a deadly Earth-Two version of our beloved Ronnie in the form of Deathstorm.”

This evil Ronnie evokes original DC Comics lore, which had Ronnie resurrected as Deathstorm and a member of the zombie Black Lantern Corps during DC’s “Blackest Night” crossover series.

While Deathstorm in The Flash may not be a Black Lantern, he will be joined with an equally evil Caitlin Snow. First teased last season in a brief time travel sequence, Caitlin Snow — who comic fans knew would sooner or later become the supervillain Killer Frost — will meet her evil doppelganger, a slight misdirection as fans presumed Caitlin of Earth-One would turn into Killer Frost. According to EW, Earth-Two Ronnie and Caitlin are still together, and will become The Flash’s next headache.

The kinda-sorta return of Ronnie signals The Flash is taking its alternate Earth premise seriously. I always wondered the possibilities of the show’s protagonists meeting their Earth-Two doubles, and The Flash is taking advantage of that in an awesome way.

The Flash returns January 19 on The CW.