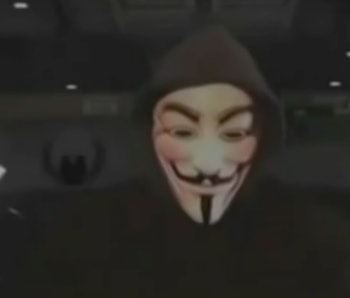 After a politically-inflammatory bookstore owner, Lee Bo, vanished from Hong Kong, a sector of Anonymous announced a new operation: #OpHongKong. In a YouTube video posted on Saturday, the hackers announce that they would begin attempts to take down Communist Party of China websites.

Causeway Bay Books, in operation since 1994, is known for distributing banned, politically-revealing books that otherwise go uncirculated in mainland China. Four of Bo’s associates went missing over the past several weeks, and now Bo himself has disappeared. He reportedly called his wife on the night of his apparent abduction, telling her that he “will not be coming back anytime soon.”

Anonymous is a disparate organization, and their operations — unfortunately — often fizzle out after they manage to shut down a website or two for a few hours. Last year, they remained very busy — but their efforts could’ve proven more effective. A prominent Anonymous-affiliated hacker, Jester, warned against taking such “operations” too seriously.

However, if Bo was indeed abducted by Chinese authorities, it would constitute a glaring breach in the Hong Kong–China “One Country, Two Systems” law.

There have been no reports to date of successful infiltration.

More like this
Innovation
8.16.2022 11:15 AM
After quitting the ISS, Russia reveals its next-gen space station
By Darren Orf
Innovation
16 hours ago
Scientists create fake leaves that generate a clean fuel source
By Sarah Wells
Innovation
13 hours ago
Can we terraform Mars? Scientists may have made a major breakthrough
By Jeff Nagle
Share: