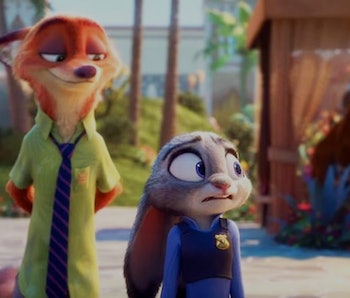 Upon the announcement of Disney’s Zootopia, it became clear that this one was for the furries. The animals were detailed and Jason Bateman’s protagonist fox — Nick Wilde — was a smooth operator. Now, with the film’s second trailer out, the studio is adding some substance to the storyline, providing some heft and conflict.

Zootopia’s got a new cop: Judy Hopps — the first rabbit officer. There may already exist a page for “How to Draw Judy Hopps,” but that doesn’t take away from her depth as a character. She’s new to town, and just as she’s arrived some animals have gone savage and ditched their warm exterior for a life of carnivore instincts and crime.

Nick is natural enemies with Judy, given that he’s a fox and she’s a bunny. But it looks like the two of them are going to have to set aside their differences to work together and save the town.

Most importantly, however, the new trailer reveals a bevy of new characters. There are sloth employees at the DMV. Their mayor is a lion. There’s a nudist yak. And the villain is the dastardly [Mr. Big](http://disney.wikia.com/wiki/Mr.Big(Zootopia), a Godfather-inspired arctic shrew.

So while the plot is nice — and this really does look like an entertaining kid’s movie — Disney knows what the folks really want.