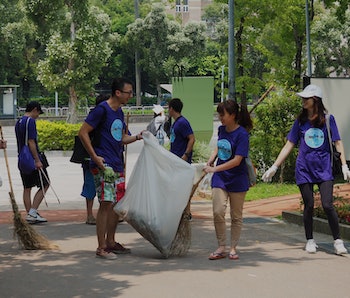 There are studies showing people who engage in charity work and other selfless activities see health benefits as a result.

One example is found in the work documented in the research article “Effect of Volunteering on Risk Factors for Cardiovascular Disease in Adolescents,” a trial performed by a group of Canadian and American scientists. In the experiment, 106 Canadian 10th-grade high school students were tested, with some assigned a two-month, weekly volunteer assignment helping out with elementary school–level children, while others were placed in a wait-list control group.

In the beginning of the study, the teens were all at comparable health levels—but by the end the participants helping with the grade schoolers showed dips in cholesterol levels, body mass index and interleukin 6 levels. “Preliminary analyses within the intervention group suggest that those who increased the most in empathy and altruistic behaviors,” the paper reads, “and who decreased the most in negative mood, also showed the greatest decreases in cardiovascular risk over time.”

However, it seems kids aren’t the only people that can reap the rewards of righteousness, as noted in the January 2016 edition of Social Science and Medicine. A featured trial titled “Volunteering is prospectively associated with health care use among older adults,” tells of an experiment involving the study of 7168 people over the age of 51, comparing the health statuses of people taking part in charitable volunteer work to others not involved.

The results indicate that the health-minded habits of volunteers appear superior, as those who regularly head out and help others were found to be 47 percent more likely to take cholesterol monitoring tests and 30 percent quicker to get flu shots. Male volunteers showed to be 59 percent more likely to get a prostate review, while female helpers were 53 percent more probable mammogram recipients. Furthermore, the volunteers in the study spent an average of 38 percent fewer times staying overnight in hospitals. “This is the first known study to examine the association between volunteering and health care use,” the article declares, then points out that “If future studies replicate these findings, the results may be used to inform the development of new strategies for increasing preventive health screenings, lowering health care use and costs, and enhancing the health of older adults.”

If all these studies hold true in the end, it could give the maxim “Good guys finish last” quite the new and positive spin.