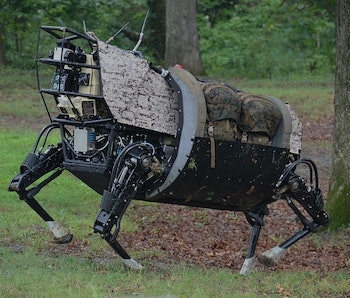 We can build robot dogs to tug at the heartstrings, but to handle combat situations, not so much yet. The Marine Corps is shipping two popular robot dog programs away from the battlefield and presumably out to a farm somewhere with lots of room to run and plenty of oil cans.

“The Mule,” as DARPA’s four-legged robotic beast is known because of its wide, squat stance, is a favorite at trade shows and familiar to the enlisted. Get it out of the lab, though, and it’s just too damn noisy to be much good in a fight. Each two million dollar robot can lug up to 400 pounds of equipment, but its gas-powered engine yowled like a lawnmower.

“As Marines were using it, there was the challenge of seeing the potential possibility because of the limitations of the robot itself,” Kyle Olson, a spokesman for the Warfighting Lab, told Military. “They took it as it was: a loud robot that’s going to give away their position.”

Then there’s Spot who, unlike the Mule, comes in at a lean 160 pounds. A product of Boston Dynamics, Spot was quiet enough to keep troops’ position a secret, but too svelte to carry anything. Its best use is likely as a scout, but its 2015 incarnation lacks the autonomy to range alone. It joins the Mule in early retirement.

For now, our soldiers will have to settle for good old-fashioned-but-not-as-adorable drones as their robotic companions.

More like this
Innovation
7.28.2022 11:15 AM
A new robotic twist on the “Turing test” fools human subjects
By Sarah Wells
Innovation
22 hours ago
This self-healing material could fix your dinged-up car in 30 minutes
By Molly Glick
Innovation
8.8.2022 10:00 AM
A wild new plane-train hybrid could whoosh you to your destination — if it can get off the ground
By Molly Glick
Share: