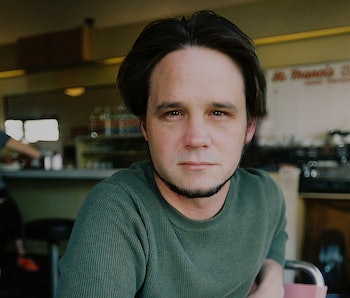 Job: Founder of The Muse Factory and AwesomeBox a social gift-giving service, and creator of the meme, “Why Do You Do What You Do?” (wdydwyd), which Wired called “the hottest team-building meme since Outward Bound.” Deifell is also a photographer and an entrepreneur.

I was an entrepreneur in residence in Eric Schmidt’s fund called Innovation Endeavors in Palo Alto, California. During the time of being an entrepreneur residence, we were basically able to look at businesses that could be formed; what needs were out there, what the markets are to serve. You scan a lot of things at a bird’s-eye level. That’s where I also met my co-founder, Dana Underwood. We’re both also professional photographers. So we’re interested in storytelling and visual storytelling in particular. We were also very interested in thoughtfulness, partly because as guys, sometimes we heard we weren’t as thoughtful we could be in relationships. We both aspired to be more thoughtful than we were, so that was a personal theme that brought us together. That mixed together with photography and storytelling mixed together, we said, “Let’s look at gift giving.”

Gift giving is a part of life, so we looked the needs that could be cool to start with. We interviewed people all over the country about the best gift they’ve given, the best gift they got, the worst gift — just listening to all these people’s stories. What we discovered through that process is that people yearn for meaning in their life; for emotion in their life. So while you might say the hardest thing in gift giving is seeking out what a person really wants — but in fact, the hardest problem is that people want to be remembered. They want to be appreciated for their gift; they want to see someone’s face when they open it up. It’s about the connection and people’s relationships and the meaning. So we formed Awesome Box with that idea.

How did you find people to interview?

We did a design thinking process that came right out of Stanford’s design school. I was an anthropology undergrad, and for me, the thinking process is anthropology. It’s really good old fashioned documentary work where you go hit the street, you interrupt strangers, you’re asking questions. When we started we didn’t have a product, we were just getting people’s needs. So we would stop people and ask them what’s your favorite gift you’ve ever given, what’s the worst gift you’ve given, and they would just start telling stories.

We wanted to do a cross-country trip, but that takes a whole lot of time. We decided the next best thing would be to go to Chicago O’Hare airport, spend the whole day in the terminals, and then come back to San Francisco. Since Chicago is in the middle of the country, we can get people coming and going from all over the country. We sat at the gates and it was the best thing in the world. People are sitting there waiting for a plane, they don’t have anything to do, so they’d love to talk to people. Nobody else is soliciting, you’re not on the street, no one’s trying to pass you pamphlets. So they had time on their hands. It was the perfect match. We had people line up saying, “Can I get interviewed next?”

So how does Awesomebox work?

Imagine toasts at a wedding, where you have people from all parts of your life stand up and tell you how much they love you and appreciate you. Everybody hears everybody else tell those stories, so everybody learns about the couple from everybody else’s stories. It’s sort of like this moment in life that you’re capturing these stories and memories of how much people love you and think you’re awesome. Imagine being able to do it online, and all have it come to a printed product, of 25, 50, or 100 cards that could essentially be toasts. Personal messages appreciating you, telling you memories, stories, moments, and then photographs from childhood or last year when you were on a trip. So then there’s 70 people who conspire and put it together for you. That’s what we do.

A host can go online, just like you would host a party, and they would invite people through our interface. When people get the invitation, they can go to a page; it’s a semi-private group for the folks invited, and they would add a message or a photo to make a card look like cards right on the page. Everybody can see it coming together and then we take it all and magically print it onto these beautiful, sick cards, that go in an Awesome Box. That’s in essence what it is. People do a lot for birthdays, especially the 30th birthday, 40th birthday, but all sorts of birthdays. People do it for retirements, get well — like if someone was in a biking accident and all of their friends want to say get well.

There was a woman who decided to go an AwesomeBox for her boyfriend because she thought it would raise the caliber of their relationship. He said later on that that was the moment that he decided he was going to ask her to marry him. Four months later, he did an AwesomeBox to propose to her. The whole thing had little hidden messages and journal entries and he presented it to her as he was proposing to her. The last card had a picture of an empty ring box and it said, “This is not the only awesome box you’re going to get today” and he had the ring for her.

People have found some really interesting uses. For us, bringing it back to Dana and I being photographers, this is a way for a group of people to tell a visual story in a creative way. It’s different from anything that’s really out there. That’s what we love so much about it.

Do you find that with modern social media making photo and message sharing instantaneous, that helps your business or hurts it?

We live in such an ephemeral world. We found that people really add so much meaning and value when they can have something printed and hold it and touch it. It raises the importance. Our job is really to take people’s thoughts and memories and being able to put it into a beautiful design. We found that people value it because it’s tangible; they can keep it; they can post it, put it on the wall, and we made cards for that purpose. We could have made a book, but a book is antisocial. By doing cards, we found that people will open it at parties and they’ll pass around the card. It becomes social.

What’s been the hardest part of establishing your business?

The hardest thing is that it’s a new kind of product. So when you have a new product that doesn’t fit in the category that people are used to. Like if we said we’re doing print-on-demand books people would say, “Oh, like Shutterfly.” You’d have that category in your head. But this is a box of cards done by people who love you and it all comes in a box. It’s a different type of product than people have seen before. People being unfamiliar with it is always a mountain to climb. I call it an “experience product” — when you experience it, you get it. And when you get it, you just want to do it over and over. We have customers that say, “I look for an occasion to give an AwesomeBox because I enjoy doing it so much.” But that’s probably the biggest challenge for us — just getting more people to experience it so they know what it is.

What advice would you give to any young entrepreneurs who are also working with “experience products”?

If you’re an entrepreneur and you have a product you believe in, you have to be willing to go 100 more miles than you expected to make it succeed. That goes with any product, not just an “experience product.” If it’s an experience product like AwesomeBox, you just have to have more grit and stay in the game longer. You’ll get early signs. Half our customers who receive an AwesomeBox cry because they’re so overwhelmed with emotion. That’s a sign. If you have that, you know you’re on to something. If you get early signs that confirm your assumptions about what the product is, you need to stay with it for the long haul.