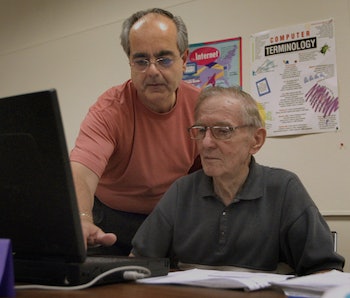 My dad occasionally tells a funny family story. My grandfather, who was aging, had decided to write a memoir. Instead of letting him compose it on his Olympia typewriter, my father encouraged his father to learn how to use a PC. My dad is pretty savvy for 65, having been an early adopter of the internet for sending his articles into The Rocky Mountain News remotely. He even worked for Microsoft for a couple of years. He brought my grandfather an older PC and sat him down to teach him the basics of word processing. He told his dad to use the mouse to move around on the screen and my grandfather — a dentist and no dummy — picked it up and put the tracking ball right on the monitor’s screen. They both had a good laugh and moved on with the lesson.

I didn’t have to teach my dad how to use, well, anything, but I’ve had to help my mother with various computing tasks — from her iPhone to her Amazon tablet. So, I put the question of moral obligation to my father, not just because he stands as a subject but because of his academic record. As a graduate student at the University of Chicago, he racked up two master’s degrees (one in public policy, one in divinity) and a Ph.D. in theological ethics. So, do we have to help our parents with tasks like how to make an Excel spreadsheet? I’ll let him explain his dissertation via an interview he conducted with The University of Chicago Magazine:

“I was in Washington, DC, at a conference with some of my fellow students in 1982. There was an air accident out of National Airport. This plane took off, clipped its wing on a bridge, and crashed into the Potomac River. There was this man floating in the Potomac with a lot of other survivors, waiting to be rescued, and this helicopter kept coming by and lowering a life ring into the water. And this man kept handing the life ring to other people in the water. And he died. He sacrificed his life for other people. I was fascinated by that. Why did this guy do that? So I started studying what’s called in philosophical circles supererogation: those acts of goodness that are beyond the call of duty. In Christian ethics, you have to do those things; you’re supposed to turn the other cheek, to do good works, to lay down your life for your friends. Philosophers would say, bullshit. That’s supererogatory. That is not necessary. So I wrote a dissertation on supererogation.”

Okay, so, having to deal with your parents as they try to figure out how to close an app ain’t rescuing people from a freezing river. But you might not want to do it. Do you have to do it? That depends.

I studied philosophy and theology, too, and, as my dad said, many philosophers would basically come down on the “do what you want” side of things. Still, going all the way back to Aristotle’s Nicomachean Ethics, we see philosophers struggling with the idea of a required morality. But, then again, many have questioned the entire idea of what good or good isn’t: Nietzsche, for instance, in Genealogy of Morals. It gets quite complicated.

It’s easy to say that, yes, if you consider yourself religious — Christian, Jewish, Hindi, Muslim, or so forth — your religion probably has a tenet related to being good to others. This would include your parents. You should help your parents however you can, sayeth all major creeds. Now, if you don’t believe in any organized faith, it’s tougher to say.

It’s true you have free will to do what you please, but there’s also what I’ll call the Asshole Factor. Your mother pushed you out of her body: You should probably help her figure out where commands differ on Macs and PCs. Or else, you’re an asshole. Plain and simple. There may or may not be a larger guiding principle that binds us all, but one thing is for sure: Everyone can spot an asshole. Or as Kant wrote, “What does it avail, one will say, that this man has so much talent, that he is so active therewith, and that he exerts thereby a useful influence over the community, thus having a great worth both in relation to his own happy condition and to the benefit of others, if he does not possess a good will?” Now there’s a man who would take the time to set up his mom’s iTunes just so.

More like this
Innovation
8.5.2022 11:00 AM
Alexa could diagnose Alzheimer’s and other brain conditions — should it?
By Joanna Thompson
Entertainment
8.14.2022 12:00 PM
Rings of Power's biggest canon change could ruin one major Tolkien story
By Alex Welch
Entertainment
8.7.2022 10:30 AM
Rings of Power clip sets up an epic Sauron moment Tolkien fans will love
By Alex Welch
Share: