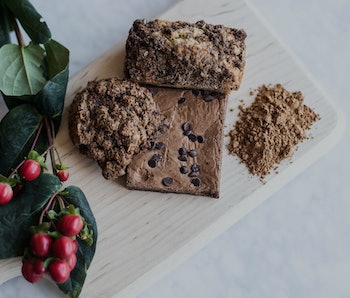 As a former designer of Starbucks roasting plants, Dan Belliveau knows better than anyone how much waste goes into your morning red-eye. For every green coffee bean tossed into the roasting pile, a fleshy coat — the “coffee cherry” — is discarded and left to rot or, worse, accumulate in nearby streams. The production model would make sense if the fruit weren’t edible, but, as Belliveau has discovered, it’s not only delicious but can be turned into something that both international consumers and local farmers can use — coffee flour.

Belliveau’s recycling project, succinctly named Coffee Flour, is one of those rare instances where big business is a boon to the nations exploited in the process. Turns out the trashed cherries can be dried and ground up into a nutrient-dense, delicious, and gluten-free meal that can pretty much be treated like a fine and slightly floral flour. While chefs like Blue Hill’s Dan Barber have already incorporated it into high-end desserts, Belliveau has already begun introducing coffee flour back to the farmers that could be producing it. Convincing locals to eat what is ostensibly trash hasn’t been easy — “It’s truly a waste product for them,” Belliveau tells Inverse — but is well worth it, he insists, for the financial and nutritional profits all parties involved could reap.

As he approaches farmers during coffee harvests, Belliveau’s pitch goes something like this: “We’re actually going to cause you to do more work, but at the end of the day you’re going to make more money from it, and we’re going to have a healthier product for you to have here locally.” His current plan is to keep 30 to 50 percent of the milled product in the origin countries, hoping it’ll be incorporated into their food supply. To ensure the farmers won’t reject the new and potentially disruptive technology, he’s figured out how to retrofit the cherry-harvesting and flour-milling tools to existing equipment.

Belliveau’s grand scheme involves a large-scale adoption of foreign technology as well as eating habits. This is a lot to ask, but there are reasons to think his plan might work. He recounts the story of a coffee farm cook he encountered making tortillas: “She took a bag of our flour and threw it in with corn masa, and by the end of the session they were cooking with it,” he says. Today, 28 Nicaraguan cafes use locally milled flour in everything from empanadas to brownies. “It’s just exposure,” he says. “That’s really what it is.”

Exposure on the commercial end is more profit-driven and thus requires a slightly different approach, one that involves pushing nutrition and versatility over proximity and convenience. He’s employed the help of Jason Wilson, the executive chef of Seattle’s Miller’s Guild, who uses the flour in everything from meringues to pancakes to beef jerky and braised pork, to convince fellow gourmet chefs of the flour’s chocolate-enhancing, structure-boosting abilities and commercial manufacturers of its nutrition-fortifying characteristics (it’s a great source of protein, iron, and fiber).

“As a chef, I kind of geek out about it,” says Wilson, touting its versatility as a spice, binder, thickener, and flavor enhancer. “On the other side of the coin is my son, who makes coffee flour pancakes by adding coffee flour to all-purpose flour because it ‘makes it taste better’.” Wilson sees it becoming a household staple but is aware it faces competition from cheaper, more traditional alternatives. Coffee flour won’t ever be able to compete with regular flour — at least not in the U.S., where wheat flour production is subsidized — but Belliveau thinks it’ll be able to hold its own against existing gluten-free flours in terms of flavor, nutrition, and cost.

Convincing entire populations of people to change their farming, cooking, and eating habits is no easy feat. Old habits die hard and preconceptions about corporate execs wanting to “make a difference” die even harder. But in the end, as Wilson put it, “there’s the overarching story of solving a waste problem and helping the coffee farmer.” This is hard to argue with, and Wilson’s plan, though it banks on an old business model — turning trash into treasure — isn’t incompatible with his promise, either.

More like this
Culture
8.6.2022 11:38 AM
60 gifts under $25 on Amazon that'll go over well no matter what
By Christina X. Wood and Cassandra Seale
Culture
7.29.2022 12:52 PM
The 10 best long-sleeve shirts for hot weather
By Claire Epting
Science
8 hours ago
What makes mold edible? A food safety expert breaks it down
By Elana Spivack
Related Tags
Share: