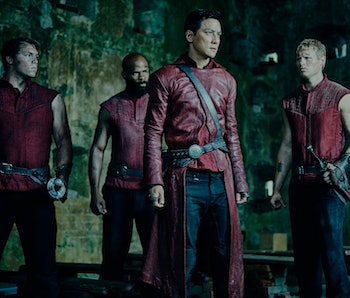 Renewal for AMC’s Into the Badlands is still vague, its fate left up to heaven, to the stars, to whatever the Monday morning Nielsen ratings say. But with Season 2 likely considering how strongly it performed when accompanied with AMC’s other violent show The Walking Dead, let’s run amok with how Season 1 went down and what that means for Season 2. (If it happens.)

Sunny is pretty much fucked.

For starters, Sunny has found himself in a bad way. Stripped of his rank and left without his trusty weapons (broken into pieces in his last fight), he’s a prisoner of the River King. He’s separated from Veil, who is carrying his baby, and only the River King knows where they’re going. Into the Badlands began as a retelling of the Chinese novel Journey to the West, but Sunny might turn it into Journey Back to the West, No Seriously Turn This Damn Boat Around.

Season 2 will see Sunny fight his way back into the Badlands. Oh hey, maybe that was the real story all along.

Trapped in the trunk once again, M.K. is back where he started from the first episode. But now, M.K. might learn his origins. He’s headed to the fabled, mysterious city, but he doesn’t have Sunny to protect him. Not that he needs it; the monks are his people, and M.K. could be on his way to harnessing his full potential.

Jade may have found herself at the tippy top of the Badlands, exploiting her way to the top. Of course, she probably only intended to be the wife of Quinn, but now that Quinn has anti-climactically met his doom and Lydia exiled, who’s left but Jade?

There’s Ryder, of course, who wanted to succeed as a Baron and conspired against his father to achieve it. But Jade has shown to be exploitative and opportunistic. She doesn’t need Ryder now. If she commands Quinn’s piece of the Badlands, she has no one to answer to.

Veil will have Sunny’s child.

Hard to say where the story will go beyond a simple fact, but it’s just important to remember why everything got so fucked up in “Hand of Five Poisons”: Because Quinn discovered Sunny broke his vows. So what’s next?

Will Tilda poison The Widow?

Considering how much of a breakout character The Widow has been, not to mention the grossly ambiguous cut away, we can reason that Emily Beecham will return as The Widow. Tilda can’t survive without The Widow, so she’d be stupid to poison her over a boy she can’t even find now. You can’t fool us all the time, AMC!

It’s just not looking good for him. Let’s hope he begins Season 2 sinking that ship like the Titanic.