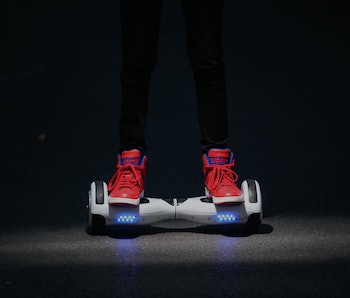 The airline ban on hoverboards first came to Inverse’s attention via this pre-boarding text notice from Southwest:

In a better world, the only thing wrong with hoverboards would be that they made you look dorky. But we make due with the world we live in, and in our world hoverboards have many, many problems. They don’t hover, for one, and despite staying firmly on the ground with two wheels they have laid claim to the “hovering” term, thereby taking the shine off any real hoverboards science might ever gift us. Worse still, they explode. Add every major American airline to the list of people who want nothing to do with these time bombs.

Southwest isn’t the only airline that won’t let you fly with a hoverboard. Delta Air Lines, American Airlines, JetBlue Airways, and United Airlines have all announced board bans. The United States Postal Service is similarly banning the devices from its planes, offering to ship them only using ground transportation. This has the potential to be a big hassle for a lot of people traveling over the holidays if someone gives them a hoverboard, as the emasculated scooters are projected to be one of the hottest gifts this season.

In all these cases the airlines cited hoverboards’ tendency to combust as a reason for the ban. The culprit is cheap lithium batteries. Tony Le, CEO of hoverboard company Glitek, told Inverse many of the Chinese factories producing the boards were cutting corners to meet demand, describing the environments as “sweatshops” without any employee training or product testing. If you still want one, Le advised looking for boards using Samsung or LG batteries — or at least a name brand you recognized. A quality ride, he said, should run you a minimum of $400 — about as much as the flight you’re about to miss by carrying it.

More like this
Innovation
Sep. 22, 2022
Trash can-sized robots could revolutionize how you travel — but there's a catch
By Molly Glick
Innovation
Oct. 2, 2022
Want a better relationship with your dog? Neuroscientists say these 7 factors are key
By Tara Yarlagadda
Innovation
Sep. 29, 2022
Scientists have created a mechanical womb that can grow life in the lab
By Miriam Fauzia
Share: