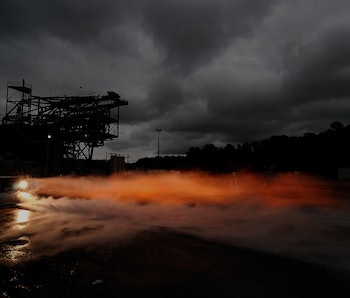 Printing stuff in 3D hasn’t yet infected our homes the way maker prophets might have hoped, but industries like aviation and space have taken to 3D printers with the gusto of YouTubers to DIY flamethrowers. The National Aeronautics and Space Administration has tinkered with printing techniques for several years, because it’s quick and cheap, but it’s now a step closer to slapping a 3D-printed engine to a rocket.

In a series of tests in October, NASA engineers created a breadboard engine — a prototype engine with parts splayed out like the limbs of a decaying snowman for easy tinkering. The engine has about 75 percent of the parts needed, says Marshall Space Flight Center engine project manager Elizabeth Robertson in a press release. But just because it’s missing a quarter of what it needs to get us to orbit doesn’t mean it ain’t impressive:

The researchers are trying to figure out if 3D printed parts hold up under the incredible conditions of take-off. In the tests, the engine delivered, with the turbopump supplying liquid hydrogen fuel at minus 400 degrees Fahrenheit that would ignite at temperatures up to a whopping 6,000 degrees. That translated to about 20,000 pounds of thrust, which NASA says is sufficient for a Mars lander. Flame on.