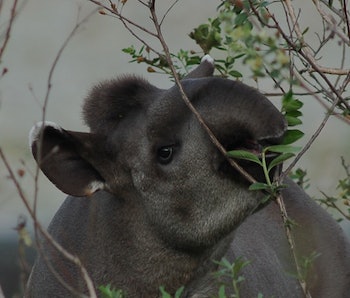 The digestive system is a beautiful, stinky thing. And it’s thanks to the guts of primates, mammals, and large birds like toucans that tropical hardwoods are able to disperse throughout the jungle. It’s not quite a botanic decree that big hardwood trees must have big fruits and seeds, but it tends to work out that way. Bats and small birds are important flappy Johnny Appleseeds in their own right, but the bigger creatures can pass seeds on the scale of big ol’ brazil nuts. Likewise, large, dense trees are able to suck in and store proportionally more carbon than their twiggier neighbors.

An international team of biologists led by Brazil’s São Paulo State University analyzed 2,000 South American tropical trees and 800 animal species that lived nearby, assessing the critters’ seed-processing abilities; in a simulation published in the journal Science Advances, the authors conclude that loss of larger animal life “poses a serious risk for the maintenance of tropical forest carbon storage.”

That large animals play a critical role in shaping their environment isn’t really a new paradigm. On a local focus, however, that tends to be predators, not herbivores, that steal the spotlight. Not enough wolves means you have too many elk that eat too much aspen which, in turn, means more erosion. It’s what’s known as a trophic cascade, and for years has been a powerful idea in ecology. In this view, herbivores are an important part of the story, sure — but not quite the wolfy champs of the narrative.

That paradigm shifts, however, when you look at the relationship between large herbivores and churning through vegetation and crapping out seeds. In ecosystems where elephants roam, be it Thai jungles or the African savanna, they knock over trees, digest tough plant matter, and disperse seeds over ranges few other beasts can match; likewise, the rhino acts as a so-called selective lawnmower, munching on specific grasses and allowing a diverse mix to flourish.

What sets the recently published study somewhat apart is that it sets the plant-eaters against the backdrop of carbon capture and global warming. So thanks, you weird-nosed tapirs and gangly monkeys!

More like this
Science
Oct. 2, 2022
Climate change could make one household pest increase its path of destruction
By Lucas Cernusak, Amy Zanne, Alexander Cheesman and The Conversation
Science
Sep. 23, 2022
We finally know how many ants are crawling the Earth right now
By Jennifer Walter
Science
Sep. 20, 2022
Fox poop has a surprising impact on tree growth
By Jennifer Walter
Related Tags
Share: