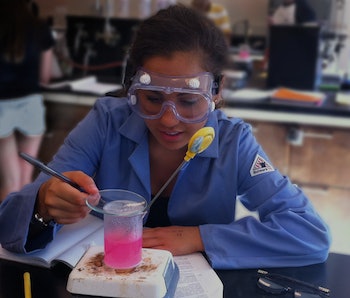 Equity and inclusion make for the criteria of scientific progress, argue thousands of physicists and astrophysicists in a passionate letter to the Supreme Court of the United States.

The letter, officially mailed on Monday, is a reaction to the most recent oral arguments in the drawn-out case of Fisher v. University of Texas.

“We as professional scientists are in strong support of affirmative action policies,” reads the letter filed by Equity & Inclusion in Physics & Astronomy, a Facebook group that strives “to provide a platform for underrepresented minorities and allies from across the globe to discuss equality, diversity, and justice in physics and astronomy” according to its mission statement.

The letter continues: “As we work continuously to educate ourselves about the obstacles facing students of color, we see, now more than ever, a need for action.”

Signed by more than 2,000 scientists and faculty of universities throughout the United States, the authors of the letter are particularly appalled by comments made by Scalia and Roberts.

The letter swiftly shuts down Scalia, stating that while not only his evidence has already been academically discredited, blaming affirmative action for the lack of progress of minority scientists is “plainly ignorant” of the structural barriers that intercede in the education system: The experience of a minority student in STEM is simply not the same as a white student in STEM. That divide, write scientists, is the obstacle — not a lack of aptitude to study at a highly-ranked university.

Their reply to a question by Justice Roberts — “What unique perspective does a minority student bring to physics class?” — is particularly full of clap-back steam:

“Before addressing these questions directly, we note that it is important to call attention to questions that weren’t asked by the justices, such as, ‘What unique perspectives do white students bring to a physics class?”. . .We reject the premise that the presence of minority students and the existence of diversity need to be justified, but meanwhile segregation in physics is tacitly accepted as normal or good.”

Background on the case: Texan Abigail Fisher didn’t get into the University of Texas. She wasn’t in the top 10 percent of her class — which would have gotten her an automatic admission to the school. The Supreme Court, meanwhile, is ever so slowly phasing out affirmative action. As of a 2003 case, race can only be used as a factor in admissions if it’s considered critical in creating education diversity. At the University of Texas, if the “10 percent plan” doesn’t get a potential student in, they’re then evaluated on the basis of two scores: one purely academic, and the other for personal achievement index — which, has been argued, considers race under “special circumstances.”

But in Fisher’s case, even if she was a person of color and the University took that into consideration, she wouldn’t have been accepted according to official court claims made by university officials. In the year she hoped to be admitted, according to reporting by ProPublica, the university did offer provisional admission to some students who had lower grades than Fisher — five of whom were black or Latino and 42 of whom were white.

Fisher’s race did not play a role in the lack of her admission, but that hasn’t kept her becoming a “symbol of racial victimization in modern America.” The continuation of the case has prompted the hashtag #StayMadAbby, used to showcase black excellence at universities across the country.

The question of whether the University of Texas will not be allowed to consider race as a factor in its admission process won’t be decided until next year. Justice Anthony Kennedy, presumed to hold the swing vote, has publicly said that he’s not quite sure why the case is even happening.

“We are just arguing the same case, it’s as if nothing has changed,” said Kennedy.

Scientists want their profession excluded from the list of reasons why affirmative action allegedly doesn’t work.

“The purpose of seeking out talented and otherwise overlooked minority students to fill physics classrooms is to offset the institutionalized imbalance of power and preference that has traditionally gone and continues to go towards white students,” the letter reads.

“We object to the use of STEM fields as a paper tiger in the debate over affirmative action.”

Below is the full text of the letter:

Letter to SCOTUS from professional physicists

Dear Justices of the Supreme Court of the United States,

We are writing to you today as professional physicists and astrophysicists to respond to comments made by Justices in the course of oral arguments of Fisher vs. University of Texas which occurred on Wednesday, December 9, 2015. First, we strongly repudiate the line of questioning from Justice Antonin Scalia based on the discredited Mismatch Theory [1]. Secondly, we are particularly called to address the question from Chief Justice John Roberts about the value of promoting equity and inclusion in our own field, physics.

We share the outrage and dismay already expressed by many other groups and individual scientists over the comments of Justice Scalia, which appear to endorse the claim made in the amicus curiae brief of Heriot and Kirsanow, that affirmative action prevents black people from becoming scientists. We take this opportunity to strongly rebuke this claim and offer a rebuttal.

We object to the use of STEM (science, technology, engineering, and math) fields as a paper tiger in the debate over affirmative action. We as professional scientists are in strong support of affirmative action policies. As we work continuously to educate ourselves about the obstacles facing students of color, we see, now more than ever, a need for action.

We are working very hard to solve the ongoing problem of the lack of underrepresented minorities in the professional community of physicists and astronomers. In spite of the misguided claims of Heriot and Kirsanow, that “gaps in academic credentials are imposing serious educational disadvantages on… minority students, especially in the areas of science and engineering,” science is not an endeavor which should depend on the credentials of the scientist. Rather, a good scientist is one who does good science. We hope to push our community towards equity and inclusion so that the community of scientists more closely matches the makeup of humankind, because the process of scientific discovery is a human endeavor that benefits from removing prejudice against any race, ethnicity, or gender. Indeed, science relies heavily on consensus about acceptable results as well as future research directions, making diversity among scientists a crucial aspect of objective, bias-free science [2, 3]. Affirmative action programs that aim to bring the numbers of minority students to more proportional levels are an important ingredient in our ongoing work. Blaming affirmative action for our community’s lack of progress in this regard is not only wrong, it is plainly ignorant of what we as scientists have determined must be done to reform our pedagogical and social structures to achieve the long-delayed goal of desegregation.

Affirmative action is just one part of a larger set of actions needed to achieve social justice within our STEM and education fields. In their brief, Heriot and Kirsanow claim that affirmative action causes fewer minority students to enter technical fields because their completion rates are low. Unlike Heriot and Kirsanow, we are scientists and science educators who are keenly aware that merely adding students to a pipeline is not enough to correct for the imbalance of power. The experience of a minority student in STEM is often much different from that of a white student in STEM [4]. Minority students attending primarily white institutions commonly face racism, biases, and a lack of mentoring. Meanwhile, white students unfairly benefit psychologically from being overrepresented [5]. We argue that it is the social experience of minority students that is more likely to make them drop out, rather than a lack of ability.

Before Justice’s Scalia’s remarks on black scientists, Justice Roberts asked, “what unique perspective does a minority student bring to physics class?” and “What [are] the benefits of diversity… in that situation?” Before addressing these questions directly, we note that it is important to call attention to questions that weren’t asked by the justices, such as, “What unique perspectives do white students bring to a physics class?” and “What are the benefits of homogeneity in that situation?” We reject the premise that the presence of minority students and the existence of diversity need to be justified, but meanwhile segregation in physics is tacitly accepted as normal or good. Instead, we embrace the assumption that minority physics students are brilliant [6] and ask, “Why does physics education routinely fail brilliant minority students?”

This is what we see when we look at a minority student in a majority-white physics class: determination and an ability to overcome obstacles and work hard in stressful environments. We see this because we know that many students from minority backgrounds are subjected to social and political stress from institutionalized racism (past and present), a history of economic oppression, and societal abuse from both micro-aggressions and subtle racism. We believe that it is these qualities that make minority students able to succeed as physics researchers.

The implication that physics or “hard sciences” are somehow divorced from the social realities of racism in our society is completely fallacious. The exclusion of people from physics solely on the basis of the color of their skin is an outrageous outcome that ought to be a top priority for rectification. The rhetorical pretense that including everyone in physics class is somehow irrelevant to the practice of physics ignores the fact that we have learned and discovered all the amazing facts about the universe through working together in a community. The benefits of inclusivity and equity are the same for physics as they are for every other aspect of our world.

The purpose of seeking out talented and otherwise overlooked minority students to fill physics classrooms is to offset the institutionalized imbalance of power and preference that has traditionally gone and continues to go towards white students. Minority students in a classroom are not there to be at the service of enhancing the experience of white students.

We ask that you take these considerations seriously in your deliberations and join us physicists and astrophysicists in the work of achieving full integration and removing the pernicious vestiges of racism and white supremacy from our world.

[4] McGee, Ebony O., and Danny B. Martin. ““You Would Not Believe What I Have to Go Through to Prove My Intellectual Value!” Stereotype Management Among Academically Successful Black Mathematics and Engineering Students.” American Educational Research Journal 48.6 (2011): 1347-1389.

[6] Leonard, Jacquelyn, and Martin, Danny B. (Eds.). The Brilliance of Black Children in Mathematics: Beyond the Numbers and Toward New Discourse. Charlotte, NC: Information Age Publishers. (2013)

** Note on this: We recently reached over 2200 signatures for this, and our Google script cannot execute to completion due to the maximum execution time. Rest assured that we are registering your responses, and your name will be included on the hard copy version, to be mailed on Dec 14, 2015.

Drafted by the Equity & Inclusion in Physics & Astronomy facebook group.

UPDATE 5:24 pm EST (Dec 14, 2015): We are closing the form! Physical copies of the letter have been mailed and we will post a copy with all the people who signed sometime this week. Thank you everyone!