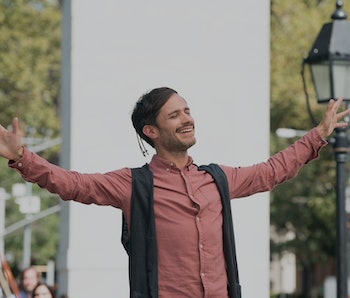 When Mozart in the Jungle arrived in late 2013 as part of Amazon Studio’s second pilot season, the show seemed doomed from the start. Inspired by a memoir of hedonism and classical music in New York City by author and associate producer Blair Tindall, the half-hour show seemed dangerously niche conceptually, maybe impractically so.

But Mozart in the Jungle worked, mostly because it leans on its crack cast, which includes Gael Garcia Bernal, Malcolm McDowell, Bernadette Peters, and up-and-comer Lola Kirke. Also, the depth of thought exhibited by the Coppolas writing it — Roman and his cousin Jason Schwartzman — and the control demonstrated by director (and American Pie scribe) Paul Weitz keeps everything on the rails, lending the show an appealingly smooth pacing. You don’t need to know Bach from Beethoven to get it, but it offers plenty of easter eggs for serious classical fans, too.

It’s not surprising that the people who make this show have achieved a certain degree of professional harmony, but it’s still amazing to witness in person. When I walked into Manhattan’s Bryant Park Hotel for a round of interviews, Saffron Burrows, who plays cellist and orchestra labor representative Cynthia, was showing a skeptical Bernadette Peters, who plays the orchestra’s administrative director, how to post live Facebook video. (“If I had your bone structure, I’d do it all the time!” Peters laughed).

A few questions later, Burrows and Kirke, who plays protagonist Hailey Rutledge, veered off into discussing the pitfalls of their respective fictional instruments.

“They manage to make [the oboe] look very sexual here,” Kirke murmurs, gazing at the promo poster behind her. “Can’t wait to see what people on the subway draw.”

For Burrows — even more affable and gregarious in person than her on-screen persona — the playful dynamic is a large part of what makes working on Mozart an unusual experience. “It feels more like a theater company,” she says.

But perhaps a musical ensemble is a more apt comparison. Mozart relies on all of its characters — big and small — to hit the right, subtle cues, and maintain the show’s manic rhythm.

In its first season, we’re launched into a whirlwind of action, following Hailey (Kirke) as she accidentally becomes the assistant to Rodrigo, the capricious, hip, Mexican-born conductor of the invented “New York Symphony,” and eventually the group’s substitute oboe player. If the first season tells the story of a timid but ambitious freshman adjusting to a very competitive environment, Season 2 finds Hailey more established, and wrestling with a subtler but thornier, set of issues. The biggest of these, of course, is her increasingly romantic and semi-symbiotic relationship with Rodrigo, which is getting in the way of her realizing her dreams as a performer.

“She obviously really cares about this person,” Kirke explains. “It’s like Moulin Rouge, when Nicole has to say ‘No, I don’t love you.’”

“They’re trying to bump her off the board… She’s fighting to be taken seriously as a woman, to run her business, and to win,” Peters says.

Ultimately, the season finds all three characters being forced to, as Burrows puts it, “crystallize the way they feel about this group of people — this orchestra.” This shared need to preserve the entity — and put everything aside to realize concerts that, as Rodrigo says to Hailey in the Season 1 finale, are “not about you…not even about me” — is the brick and mortar of this show. Everything in it comes back to the moment of music-making, eventually.

“Last season was all about setting up a season,” Schwartzman explains. “So I was excited to get into showing some more performances.”

The new season pushes through narratives from the show’s first, where many art music institutions are struggling to attract attention and money, both in New York City and around the country. Gloria and her marketing team go overboard to please donors and devise effective PR, while Cynthia and her committee of orchestra members are close to striking. In the season premiere, the concertmaster, Warren (Joel Bernstein) draws comparisons to a few real-life orchestras who went through similar ordeals, including the Minnesota Orchestra, which suspended operations for a year and a half in 2012.

“We would hear stories, and interviewed a fair number of people,” Paul Weitz commented. “We’re in Los Angeles, and there are members of the Philharmonic there who came from Minnesota. The L.A. Phil is healthy, with a five-year labor contract, but most orchestras aren’t like that.”

But these overarching conflicts aren’t there simply for curiosity’s sake. They mirror and play off of the characters’ specific, personal struggles.

“We’re dealing with an overall theme of reinvention,” Weitz explains. “The classical music world is trying to reinvent itself, in the service of staying alive and finding a new audience… and it’s also happening in with the characters. Outside of Lola’s conflict… there’s the issue of whether Gael is comfortable being an expat, of Malcolm [McDowell, as ex-conductor Thomas Pembridge] trying to become a composer, of Saffron trying to champion the orchestra in the labor group, and so on.”

With more narrative threads than ever, Mozart in the Jungle is truly an ensemble endeavor in its second season. While the orchestra travels abroad, maintains an illicit softball team and detaches from the administration, Coppola, Weitz, and Schwartzman reached out in all directions to exploit every odd dynamic that worked.

“As the first season was going on, we started to see chemistry between pairs of actors,” Schwartzman explained. “You’ll see a lot of characters who were small in the first season become bigger just because we had such a great time working with them. Mike [Rodrigo’s burly new assistant] was just an extra in the pilot, and [piccoloist and Cynthia hookup] Union Bob and Warren.”

Mozart’s second season takes another step closer to the classical music world in this season by integrating appearances from some of its biggest figures. Gustavo Dudamel — the Venezuelan star conductor of the L.A. Philharmonic who is usually considered to be the primary inspiration for the character of Rodrigo — appears in the first episode, in which Rodrigo guest-conducts the real L.A. Philharmonic. As Weitz recounts, the scene was actually filmed on location in front of a paying 12,000-person audience.

“We only had one take. Gael was a bit nervous, and he and Gustavo had a shot of tequila right before doing it.”

In another segment, a crew of superstars including renowned concert violinist Joshua Bell and piano virtuosos Emmanuel Ax and Lang Lang congregate at a Brooklyn bowling alley with Hayley and other orchestra members.

“Watching Lang Lang play was one of the most beautiful things I’ve ever seen,” Kirke says. “I’ve bowled at The Gutter before and gotten blackout drunk there… I never thought I’d see something actually beautiful happening at that bar. Talk about a marriage of high and low culture — that was kind of emblematic of that.”

Here, Kirke alludes to a common characterization of Mozart: The show, after all, constantly juxtaposes reckless and bacchanalian scenarios with scenes of nuanced performances of Schubert and Sibelius. Though some of the shock value is toned down in the second, more plot-driven season, we still find the orchestra indulging in plenty of licentious behavior. Outside of the expected sexual partner-changing (watch out for Dermot Mulroney as a hunky, introspective concert cellist), there are randomly occurring, farcical moments of crime, violence, and drug use.

Outside of Warren (or as Rodrigo dubs him, “Wurren-Boy”) getting mixed up with the Mexican underworld, one of the season’s most humorous segments, comes after Rodrigo and Thomas (McDowall) — embroiled in separate creative crises — sample a hallucinogenic mushroom paste. In an extended sequence, the two free-associate half-cogently about their pasts and the nature of existence. The approach, Schwartzman explained, was actually inspired by a video of timed storytelling improvisations by avant-garde composer John Cage. Schwartzman, in his first directing credit ever, held up oversized notecards off-camera, with subjects for Bernal and McDowall to riff on. The resultant footage was one long, thoroughly absurd forty-five-minute take.

“Did Jason tell you he was wearing a mustache and a monocle for that?” Burrows asks me. Kirke chimed in: “And he’d say ‘1, 2, 3, enchant me’ or ‘Make magic’ instead of ‘Action’… He had an aviation suit on.”

Schwartzman’s tactics were actually a reaction to Bernal’s idea to loosen up the pre-existing, formalized script for the episode — by multiple reports, not an uncommon occurrence on the show.

“Gael has an amazing comedic head on his shoulders,” Weitz adds. “He’s like a weird version of Cary Grant.”

Though everyone on hand at the hotel seems excited about the premiere of the new season, no one’s enthusiasm exceeds Schwartzman’s. Between interviews, he’s peddling a huge pile of 2x4-inch flip books, full of the abstract geometric patterns that form this season’s opening credits — each episode has a distinct one — this season.

“We want to spread the word,” he says. “Please take as many as you want, and give them to your friends.”

On the show, these introductory images are accompanied by a lush orchestra reharmonizing the tune from “Lisztomania,” the 2009 Phoenix song loosely inspired by 19th-century composer and pianist Franz Liszt and the mania he inspired. It’s that “high and low” dichotomy of Mozart in the Jungle — always a bit ridiculous — compressed into one irreverent musical gesture: the spirit of the show in thirty seconds of vibrant sound and color. While Mozart is breezy fun, its sincere depiction and love for the music is what gives the series its magic.

“I’ve always found classical music a little bit inaccessible, but this show has made it accessible for me” Kirke says. “Sitting amongst the orchestra and hearing them play these pieces is the most euphoric experience.”

More like this
Entertainment
15 hours ago
Last of Us Episode 3 release date, time, and trailer for HBO's zombie show
By Claire Fox
Entertainment
Jan. 27, 2023
The Last of Us Season 2 renewal: Everything we know so far
By Eric Francisco
Entertainment
Jan. 26, 2023
Critical Role's best campaign is finally becoming an animated series
By Dais Johnston
LEARN SOMETHING NEW EVERY DAY.
Related Tags
Share: