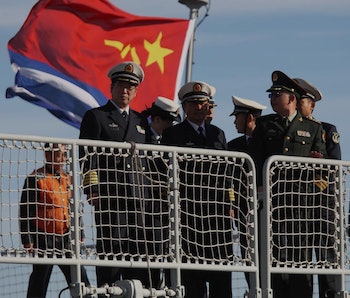 A reporter for the BBC received threats from the Chinese Navy while flying through international airspace, as his Monday televised and online report revealed.

Journalist Rupert Wingfield-Hayes recently took flight in a civilian-piloted plane to gauge what sort of reaction his presence might invite upon flying over the Spratly Islands—a field of reefs, atolls, and small land masses located off the coast of the Philippines in the South China Sea of the Pacific Ocean, through what is widely recognized as international airspace.

Despite a global understanding that this route is to be considered free of any jurisdiction, China is apparently turning some of the reefs into full islands—capable of supporting structures and airfields—and furthermore defending this new construction, deeming the new developments Chinese territory.

Wingfield-Hayes, leaving in a small plane from the Philippine Province of Palawan, traveled into the Spratly sprawl—and at only 140 nautical miles from the Philippines spotted newly constructed land out of the plane’s windows. The area, known as “Mischief Reef,” was (according to the reporter) merely a submerged reef a year ago—yet his camera now clearly shows a full island in its place.

Once his plane got within 12 nautical miles of the island, the craft’s radio abruptly crackled with a message from the Chinese Navy, in English:

“Foreign military aircraft in north west of Meiji reef (the Chinese name for the land mass), this is [sic] Chinese Navy…You are threatening the security of our station…In order to avoid miscalculations please stay away [sic] this area and leave immediately.”

Below the plane, two Chinese naval vessels cut through the water. The pilots flying with Wingfield-Hayes replied, explaining its civilian classification and mission of carrying passengers to Palawan Island, and that it was flying over international waters—but the Chinese broadcast message remained the same: leave the area immediately.

At the same time, the BBC cameras captured several Chinese ships within the Mischief Reef lagoon, as well as a cement production plant and a runway on the island. Wingfield-Hayes suggested, “A Chinese fighter jet taking off from here could be over the Philippine coast in as little as eight or nine minutes.”

Soon following the Chinese threat, the radio picked up a new message:

“China Navy, China Navy,” the voice said. “We are an Australian aircraft exercising international freedom of navigation rights, in international airspace in accordance with the international civil aviation convention, and the United Nations Convention on the Law of the Sea - over.”

It was an Australian military plane, and it repeated its message several times, without response from the Chinese. The presence of the Australian craft was unexpected, reported Wingfield-Hayes, as while the U.S. is well-known to be conducting transit testing through the area, Australia had not officially started doing the same.

He additionally reported that “more than 40 percent of the world’s trade passes through the Spratly Island waters,” and that “in the past year China has built at least seven new islands, three of which featuring runways…the aim is to reinforce China’s claim to the whole of the South China Sea.”

The response to Wingfield-Hayes’ story generated enough of a response that the reporter is hosting a Tuesday Facebook Q&A at 1 a.m. EST (06:00 GMT):

More like this
Innovation
8.8.2022 10:00 AM
A wild new plane-train hybrid could whoosh you to your destination — if it can get off the ground
By Molly Glick
Innovation
12 hours ago
Scientists at CERN have discovered too many particles for physics to keep up
By Harry Cliff, Tim Gershon and The Conversation
Innovation
8 hours ago
Mars City: 3 Red Planet resources could forge a critical building material
By CAROLYN COLLINS PETERSEN and Universe Today
Share: