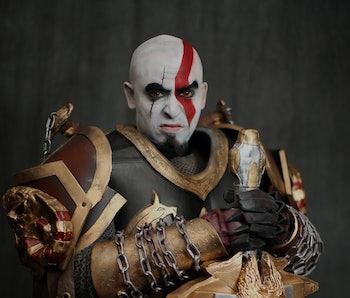 Modern comic-cons naturally attract impressive cosplay, and some will argue that their cons sport the best scene. I hear Dragon*Con mentioned a lot. But whether it’s because of location, comfortable fall weather, or gargantuan attendance (This year: 167,000) the New York Comic Con cosplay scene is one of the best — which makes a new survey they just posted a curiosity.

As seen on its Twitter account, NYCC links to a survey specifically regarding the convention’s cosplay scene.

On its own, the survey is ho-hum. And for the most part it is. But keep taking it, and you find things get interesting.

This is how it starts, with the most basic of basic questions.

But a few pages later, you arrive here.

It’s a little innocuous, but read that first question again and consider what it’s like at New York Comic Con. When you’re a part of a crowd of 167,000 during that weekend in October, you’ll find foot traffic stalling to a halt because a huge Transformer is posing for a photo. New York Comic Con’s crowd circulation is a growing problem as the biggest Comic-Con on the east coast hits critical mass. A survey is no-doubt one way to figure out what can be fixed, but how ReedPOP — NYCC’s parent organization — will solve these issues is up for speculation.

Regarding the Eastern Championships of Cosplay, there is no doubt a lot of cosplayers who take it seriously. Typical contests exist, but a championship reframes the conversation. You aren’t doing this for a high-five and an Applebee’s gift card. Championships means there are stakes and reputations, and cosplay is beginning to have its share of stars and brand names. In 2014, the convention responded to the booming scene by introducing the Eastern Championships of Cosplay to NYCC, an additional leg to their main cosplay tournament that takes place at C2E2 in Chicago.

But not everyone wants to compete. An overwhelming majority of cosplayers are in it for a good time, the art, and the community. If the outside events from this year indicate anything, there appears to be a demand for parties and raves instead of competition.

Considering how New York Comic Con organizers have pioneered some things in the cosplay scene, many of them necessary, this survey may be more than meets the eye. In 2014, NYCC were among the first to place important signage warning against gross harassment to protect attendees, and it’s a practice that has since become commonplace in many conventions.

The result of this seemingly mundane survey to help NYCC get a better idea of what to do with all their cosplayers may help further establish boundaries for tomorrow’s con-scene.

We reached out to the organizers of New York Comic Con about the survey, but organizers declined to comment. We’ll update when we hear back.