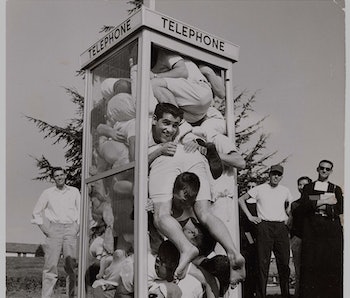 Remember when Facebook was the place for young folks who were way too cool to be caught dead on MySpace? Back before your Aunt Ruby harnessed the power of motivational cat memes and Farmville invites, and your Uncle Frank realized awkward holiday dinners and forwarded chain emails need not be the only place for half-cocked racist rants, Facebook was a place for the hip kids. And there is nothing hip kids love more than breaking records, especially if it involves teaming up with other hip kids to do it.

Almost from the inception of the Facebook group feature, the popular fad was for youngsters around the world to race and see which groups could recruit the most members. Long about 2009, the magic number for Facebook groups was 1 million, a number that can only be read today in a Dr. Evil accent. Often these groups served some sort of purpose: One of the most popular groups for a while was the Six Degrees of Separation Social Experiment. Obama famously tried to recruit 1 million members to join his 2008 campaign Facebook group, only to be outdone by Stephen Colbert.

Many of the most populous groups were simply a function of the platform itself: “Facebook Developers” was a 3 million-plus network of developers trying to integrate the new Facebook technology into existing websites and apps. More common were the number of million-plus groups dedicated to protesting Facebook itself.

But most memorably, the largest of the Facebook groups were designed for the sole purpose of having the largest Facebook group. With names like Let’s break a Guinness Record! 2010! The Largest Group on Facebook! these groups were simply attempts to see how many party people could be crammed into a single, digitized space. And while the medium was new, fads involving the youngs trying to set records based on how many of themselves they could cram into the smallest possible space have existed since the early 20th century. Cars, telephone booths, dance floors, even trees, the history of “cramming” is long and inglorious.

The Roaring Twenties were a time of rebellion and liberation for young people across the planet. Shrugging off the social restraints of the Victorian era, youngsters flocked to co-ed clubs for evenings of booze, jazz, and the shaking of asses. New dances like the Charleston were so scandalous, they were banned from many of the era’s dance halls. In protest, the flyest flappers and sheiks decided it would be a real hoot to stick it to the man and get as many bodies on the dance floor as possible. Contests varied from last-couple-standing marathon-style competitions to events designed to see how many couples could occupy the dance floor at the same time.

Over the next couple of decades, that basic cramming premise evolved. Instead of gathering a crowd for a particular feat (dancing, kissing, singing, etc.), the object became cramming as many bodies into a particular space as possible. In the 1950s, cramming went from a fad to a full-on sport. Early cramming competitions were based on the fairly new concept of a clown car introduced by the Cole Bros. Circus. Sororities and fraternities across the nation battled to see how many bodies they could pile into the most compact cars of the era.

Cars weren’t the only tight spots worthy of trying to smash you and 20 of your closest friends into. In part due to a Life magazine photo essay documenting South African college students’ attempt at setting the first Guinness-approved cramming world record, phone booths became the international cramming space of choice. College kids lubed up and jammed themselves into phone boxes from Modesto to Auckland.

The quest for the record became a cutthroat affair: a Canadian college was forced to forfeit their title as phone booth-cramming champs after it was discovered they built an extra-large phone booth a few cubic feet bigger than regulation. A year later, the Brits decided that none of the cramming records were valid unless someone in the booth could still answer an incoming phone call.

All fads tend to have a familiar and short arc, and cramming also succumbed. The cool kids jammed themselves into cars and telephone booths, because that’s totes the cool thing to do. But then the not-so-cool-kids pick it up, go all fucking extra, and ruin it for everyone. By the end of 1959 the squares started stuffing themselves into all sorts of unhip things like trees, laundry machines, and even outhouses (bless you, South Dakota).

Much like any good fad, cramming didn’t retire, it just took a hiatus. Car and phone booth cramming have made a comeback on 21st century college campuses. The influences of cramming can be seen online on just about every form of social media with a “like”, “follow”, or “join” feature. As it turns out, Gen-Xers and millennial hipsters have done their damnedest to relive their parents’ cramming glory days online and in real life. The internet at its best revives this simple, reassuring premise: Guys, we’re all in this together.