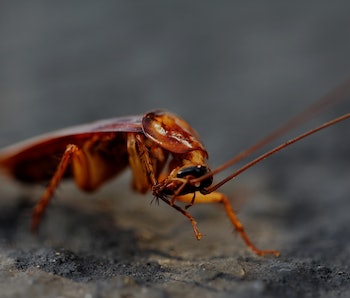 A recent study indicates that the bacteria living within a cockroach’s gut may work to keep related insects bonded and living together.

If you find the notion that cockroaches are living and proliferating within your living space to be disturbing, perhaps you shouldn’t think too hard about the theory that it’s their excrement that seems to help keep them together under your roof, wriggling in union as only a healthy clan of cockroaches can.

According to a recent article published by North Carolina State University professor of entomology Coby Schal in Proceedings of the National Academy of Sciences, “We demonstrate that the gut bacterial community plays a pivotal role in production of aggregation pheromones in the German cockroach.”

The PNAS piece goes on to explain that “the feces of normal and gut bacteria-inoculated cockroaches emits highly attractive volatile carboxylic acids (VCAs) that elicit aggregation whereas bacteria-free feces contains few VCAs and is relatively unattractive.” In other words, when the roaches that live in your pad are properly filled with bacteria, their poop keeps their cousins interested in hanging out.

Apparently, the VCAs serve as pheromones that remind nearby bugs they belong as the insects living in the same area share a diet, due to eating what’s available in their environment. This means what’s eaten, digested and excreted should be similar within the community of bugs, making those pheromones “colony-specific odors,” creating “fidelity to persistent aggregation sites.”

“Only now are we beginning to appreciate the involvement of microbes in animal communication and behavioral systems,” Schal recently said in Smithsonian, “This is one of the cleanest examples of this type of thing.”

Past studies into the impact of bacteria and scent focused more on mammals, particularly the hyena. According to a 2013 study, the animal is known to “paste,” or leave a redolent residue on grass, secreted from a scent pouch. The paste contains “fermentative bacteria,” and much like in the cockroach study, that project led to results that indicate “that the diversity of symbiotic bacterial communities…appears sufficient to underlie chemical signaling…and affords strong empirical support for the fermentation hypothesis for chemical communication.”

However, while working with large animals like hyenas means a project with large outdoor boundaries, the roach is easily studied in a lab, and can be raised under sterile, controlled conditions. Schal’s PNAS article refers to “gut bacteria-inoculated cockroaches”—cockroach nymphs reared under sterile conditions that left the bugs’ bowels bacteria-free.

According to the study, roaches were noticeably less interested in feces that did not possess bacteria—or volatile carboxylic acids, products of bacterial activity.

“Non-sterile feces have massive amounts of these acids, whereas many compounds were missing and most were tremendously underrepresented in sterile feces,” Schal told Smithsonian. “This suggested a correlation between the behavior we were seeing and the chemistry,” continuing, “I think in the next year or so we’re going to see lots of examples of this type of thing occurring in nature, from insects all the way up, possibly, to humans.”