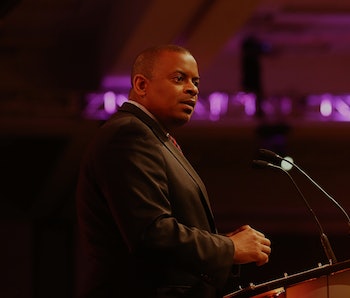 The future lies in megacities, with 70 percent of the world’s population predicted to live in urban areas by 2050. And the federal government seems to be prepared for the boom with a big pile of cash: Today, the Department of Transportation announced a $50 million contest to make cities smarter.

Besides the $40 million awarded by the government, the winning city will get up to $10 million from Microsoft co-founder Paul G. Allen’s Vulcan, which grants money to “professionals who are innovative, agile and able to perform at the highest level.”

“Our national vision for transportation is still very much constrained by 20th-century thinking about technology,” Transportation Secretary Anthony Foxx said in a conference call announcing the contest. “We are imagining connected and autonomous vehicles that practically eliminate crashes. And we are imagining this technology interacting with wired infrastructure to eliminate traffic jams as well.”

“This is a conversation about what out cities should look like in future,” Foxx said.

Challenge pitches must be entered by February 4, 2016, with five finalists announced in March 2016. Cities will have to show how advanced data and technology will reduce congestion while keeping travelers safe and supporting local economies.

The post notes that innovations could include tech to interact with connected vehicles “that can talk to each other or the surrounding infrastructure, smart sensors, and self-driving cars, as well as the partnerships cities can mobilize to pilot these technologies at scale.

Here are the rules:

· An environment that is conducive to demonstrating proposed strategies

Foxx spoke in broad terms during the announcement, saying that the entries would not favor drones or autonomous vehicles or proposals that cut down on climate change emissions.

Entries could also be for proposals already underway — Seattle’s light rail expansion plan, for instance — and will require no matching funds from the winner.