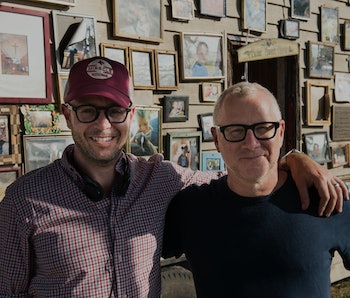 Tom Perrotta is a novelist The New York Times has called “an American Chekhov.” In his downtime from writing satirical classics like Election and Little Children, Perrotta is also a TV show creator and an Oscar nominated screenwriter. His most recent project is the critically acclaimed HBO drama The Leftovers, which he writes, creates, and produces with Damon Lindelof.

Perrotta spoke with Inverse about the evolution of fall’s most captivating show and balancing the mystical with the mundane when you’re working with Damon Lindelof.

The Leftovers has an interesting interplay between the mundane and the supernatural. Your work usually strays more towards realism, whereas the supernatural is more Damon Lindelof’s realm. What is that balance like in the writer’s room?

I think that’s a fair way to describe the general dynamic. Damon is coming at the story from a really exciting tradition. He’s a comic book guy, he’s a sci fi guy, he’s a supernatural guy — and he’s also a great character writer. So he is definitely a very bold proponent of getting the story as far as it can go, and sometimes I played the role of the skeptic or the reader. That’s the kind of interesting tension. I will say that this season, we seemed to have internalized each other’s perspectives and sometimes we reverse. That can be fun and a little disorienting for both of us.

Is there an example where you leaned more towards the supernatural side?

There were moments where I think he thought I went further than he might go. But that’s part of the dynamic of the show; we’re constantly asking ourselves, “Is that too far?” Most often, he’s the one pushing that envelope. But sometimes I might be doing it as well.

On a character level, this season both Kevin and Tom are probably pushed the furthest away from who they are in your book. First, on Tom: is he an author-proxy character, or is his name a coincidence?

For whatever reason, I tend to give my characters what I think of as ordinary names; like the kinds of names kids had in my childhood. What happened after writing six or seven books is that I started to run out of names — and one of the reasons is that I was always limiting myself. I can’t use that name because that’s my mother’s name or girlfriend’s name. I realized I need to reclaim some of these names. And why not start with my own, because I’ve never had a character named Tom.

And, about Kevin, last season you made him the police chief rather than the mayor like he is in your book. Season 2 saw his mental illness/mystical ability become far more prominent. What are your thoughts on Kevin’s evolution?

What’s interesting about the process of telling a story like this is that at first, you make very minor adjustments. In my mind, making Kevin the police chief instead of the mayor makes perfect sense. The police chief is in the fray and can participate in violent conflicts. The mayor in the book was a nice, well-adjusted guy in the book. It’s very clear that a show like this wasn’t going to have a nice adjusted guy at the center of it. So the first change made perfect sense to me.

I don’t think there was a grand plan; we introduced this idea that Kevin might be sleepwalking and I don’t think any of us really had a sense that it was going to become such a large part of his character and part of the show. What happens when you write is that certain decisions you make have a certain electricity around them. Things get interesting when these things happen.

We’re trying to preserve this idea of Kevin as a decent man, but he’s also doing some pretty difficult things. You can say on one hand that sleepwalking is a little bit of a cheat, but on the other hand I think it’s led us to see that this character is under enormous pressure and may in fact be having a psychotic break and that sleepwalking may be a way that he’s attempting to naturalize this, when really something much more serious is going on. But it was a slow evolution, like a lot of things on this show. We could plan two seasons down the road or three episodes down the road. We’re sort of reacting to the decisions that we make.

And what about the evolution of more supernatural elements seeping in, like in “International Assassin”? How do you navigate the balance between the mystical and the mundane — do you think about keeping the scales balanced and not tipping too far in one direction?

We think about it all the time. I think the reason is that question is the question our characters are grappling with. What they keep trying to do is figure out what kind of framework can sit over this event — the Sudden Departure and its aftermath and help them to feel better. So very clearly, in episode 7, Laurie tells Kevin “you are psychotic, you need to go to a mental hospital, you need to be medicated.” And Virgil says, “You have a demon that’s on you, and to get rid of this demon you are going to have to die and do battle with it in the underworld.” Or the afterlife, or whatever it is.

Kevin is basically presented with a choice: which framework will allow you to live the life you want to live? And the life he wants to live is with Laurie and Jill and the baby now. And he takes this bold leap. Whether or not what we saw in “International Assassin” is a dream or hallucination or there’s a literal journey to the underworld, Kevin was shown a framework. Nora chooses a different framework all the time. She sees the world in a much more hardheaded skeptical way, even though she’s been victimized in ways far worse than Kevin. So our characters are constantly choosing these frameworks, and I don’t think we want to tip the scale in one direction over the other.

Which characters do you enjoy writing and exploring the most?

Nora is always close to my heart. I think Laurie has been fun this year because she can talk and she’s brought such a new perspective to the show that wasn’t there before. Jill is wonderful. She hasn’t had quite enough to do this year, but I think that’s because the show is so populated. But we have a lot of great characters to write for.

I’m sure you’re aware of online chatter around The Leftovers — critics and audiences alike are amazed at how the season has basically addressed any criticisms people had about Season 1. Was that a conscious decision — did you make notes of common Season 1 criticisms in the writer’s room?

I have to say, I feel like I don’t agree with this idea completely, because I just don’t buy the idea that Season 1 was a bad season of TV. I think it took a little while to get going, but the second half of Season 1 is quite great. Season 2 feels, in many ways, like an extension of that, to me. I also don’t feel like Season 2 is brighter and cheerier than Season 2. I think the opening of this season was funny, and unusually comic — and that’s as far as we got, because at the end of that, Evie and her friends disappeared and it became a very familiar Leftovers mood of dread and sadness. So I think people are maybe imposing a kind of false framework on the two seasons. But that’s fine.

What about the humor — this season has undoubtedly had more levity than Season 2. Since your novels have a lot of humor, was that your influence?

I guess I may be alone in thinking the first season was kind of funny at times. But yes, I think we’ve embraced more of the certainty of the situation in a way that doesn’t deny any of the darkness of danger in it. I really do enjoy that. I’m very attuned to the absurd. I think we’re finding it more in Season 2.

Let’s talk about this season’s tour de force, “International Assassin.” What was some of the conversation in the writer’s room around that episode?

We had this idea that we wanted to have an episode that occurred in this space between the living and the dead. We’ve been talking about shamanism and various kinds of religious positions we could explore this season. That’s one of the things this show wanted to do — to really show contemporary characters kind of exploring religious perspective and having religious experiences. We had this idea of moving to this world between the living and the dead or the world of the dead, depending on how you look at it.

To me, the hard question was, “how do we get Kevin to die?” Obviously there could have just been a suicide. But I think what was interesting was to have it structured with Kevin being presented with two choices — and to choose the crazy one. To have that crazy one kind of work for him. Once you have him dead, then it was a great blind flame. What does the world of the dead look like?

That was one of the fun days in the room, you’ve got the scenarios that came up from mythology, from religion, from thrillers to movies in the 1970’s, it really was a playground at that point. Once we had gotten our characters plausibly into this place, I think we felt very free and that was genuinely exciting.

What’s been the most surprising part of the journey for you?

I knew we were going to grow beyond the bounds of the book — it was built into the idea of a TV series. But to have this world of Jarden; a world created in a matter of months, and then to walk onto the set and wander around. It’s kind of an amazing thing to watch your ideas become real. And it was different for me than writing a novel. It’s a slow, private experience. This felt much more sudden and explosive, to have this new world spring up.

Has it been different from writing movies too?

The movie scripts I’ve written have been based on my own books, so they’re worlds that happen before. The adaptations from my perspective is a little bit more a matter of compressing and collecting, but creation happens on the director and actor’s sides. It’s a secondary process to the novel.

What do you hope the audience feels at the end of “I Live Here Now”?

There will be many, many emotions that people will feel watching it. It really is very emotional and powerful.

And if you do get renewed for a third season, is there anything you’ve discussed about it even vaguely? Perhaps a location change to Australia?

I can very honestly tell you that we haven’t even discussed it. We really have been building this show episode by episode, and we haven’t been able to project ourselves very far into the future.

More like this
Science
Jan. 28, 2023
The best mystery thriller on Netflix ignores a basic fact about hydrogen energy
By Tara Yarlagadda
Science
Feb. 4, 2023
The Weirdest Sci-Fi Apocalypse on Netflix Reveals a Controversial Field of Medicine
By Tara Yarlagadda
Science
5 hours ago
Ancient Neanderthal Leftovers Reveal How Skilled Our Distant Cousins Were
By Miriam Fauzia
LEARN SOMETHING NEW EVERY DAY.
Related Tags
Share: