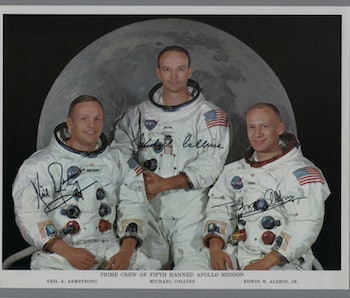 A photograph of the crew of Apollo 11 mission signed by its three members, NASA astronauts Buzz Aldrin, Michael Collins, and Neil Armstrong, the first man on the Moon, is for sale. This is hardly unbelievable, but it’s notable enough to land a spread in an auction house catalog. But how much will it go for? Unless you guessed a number between $3,000 and $7,000, you’d be wrong. Now consider this: Princess Leia’s slave costume, unsigned by Carrie Fisher, went for $96,000. Fake space beats real space on the block.

The reason is as simple as it is strange — and it has everything to do with the jingoistic nature of the space race. During the early years of the space program, NASA saw astronaut signatures less as a commercial opportunity and more as an outreach opportunity. Fans could write in a request for an autograph with a self-addressed return envelope, free of charge. Astronauts, a growing, tax-funded celebrity class, would respond with their John Hancocks, ensuring continued public enthusiasm for their program.

That program was designed to capture imaginations and it worked gangbusters. Just ask Richard Garner, who now runs The Space Collective, an online store for NASA memorabilia and other cosmic stuff.

“I’ve always had a fascination with astronauts,” Garner told Inverse. “I was in the hospital a lot as a child, and out of the window of the hospital I’d always see the moon for a half hour as it went past the sky. And as a child your mind wanders, and you pretend you’re on the moon, to escape the confines of your hospital bed.”

He wasn’t the only one looking up or reading the stories about the heroes blasting off skyward. “People did become very enthusiastic about spaceflight, and sent in requests for autographs,” says Garner. “After a time, and as things became more popular, it became impossible to give everybody an autograph.”

NASA adopted the same solution as President John F. Kennedy: the autopen, a tool invented by a Navy man to replicate needed signatures based on tracings. The children receiving autographs didn’t know it, but the already flooded market was now flooding with fakes. At the time, there weren’t online directories to help collectors sort the real from the automic.

So that’s the problem, from a collector’s standpoint, with the Apollo 11 mission photo: It’s not rare. Those early astronauts were hyperaware of their place in history and used liberally as government propaganda. There was little thought given to money in those early years, though when Apollo 15 astronauts were caught taking unauthorized postage stamp covers on the mission for the purpose of selling them, it basically ended their careers.

Because the straightforward memorabilia is easy to obtain, the NASA collecting community has moved on to more exotic targets. The nexus of the trade in space travel artifact is the message board Collect Space, which actively maintains a current list of astronauts willing to sign stuff and provides information on how to reach them.

NASA mostly stays out of it, unless there’s something illegal going on — for example, if one of the pieces Apollo moon rock that has disappeared over the years turns up for sale somewhere, says Garner.

Prices are affordable, but they’re on the way up, he says. Garner has seen the cost of autographs and memorabilia close to triple in five years. And he expects the trend to continue.

“The Apollo astronauts for instance are in their late 80s, and early 80s, now. And unfortunately nobody lives forever. So right now they are affordable,” says Garner. “In 10 years time, they will become a lot more expensive.”

More like this
Science
18 hours ago
NASA is set to make the nearest flyby Jupiter's most habitable moon in 22 years
By Kiona Smith
Science
4 hours ago
Artemis I: A fire at NASA Kennedy gives the long-delayed Moon mission its latest twist
By Doris Elín Urrutia
Science
Sep. 26, 2022
NASA's DART spacecraft successfully crashed itself into an asteroid
By Doris Elín Urrutia
Related Tags
Share: