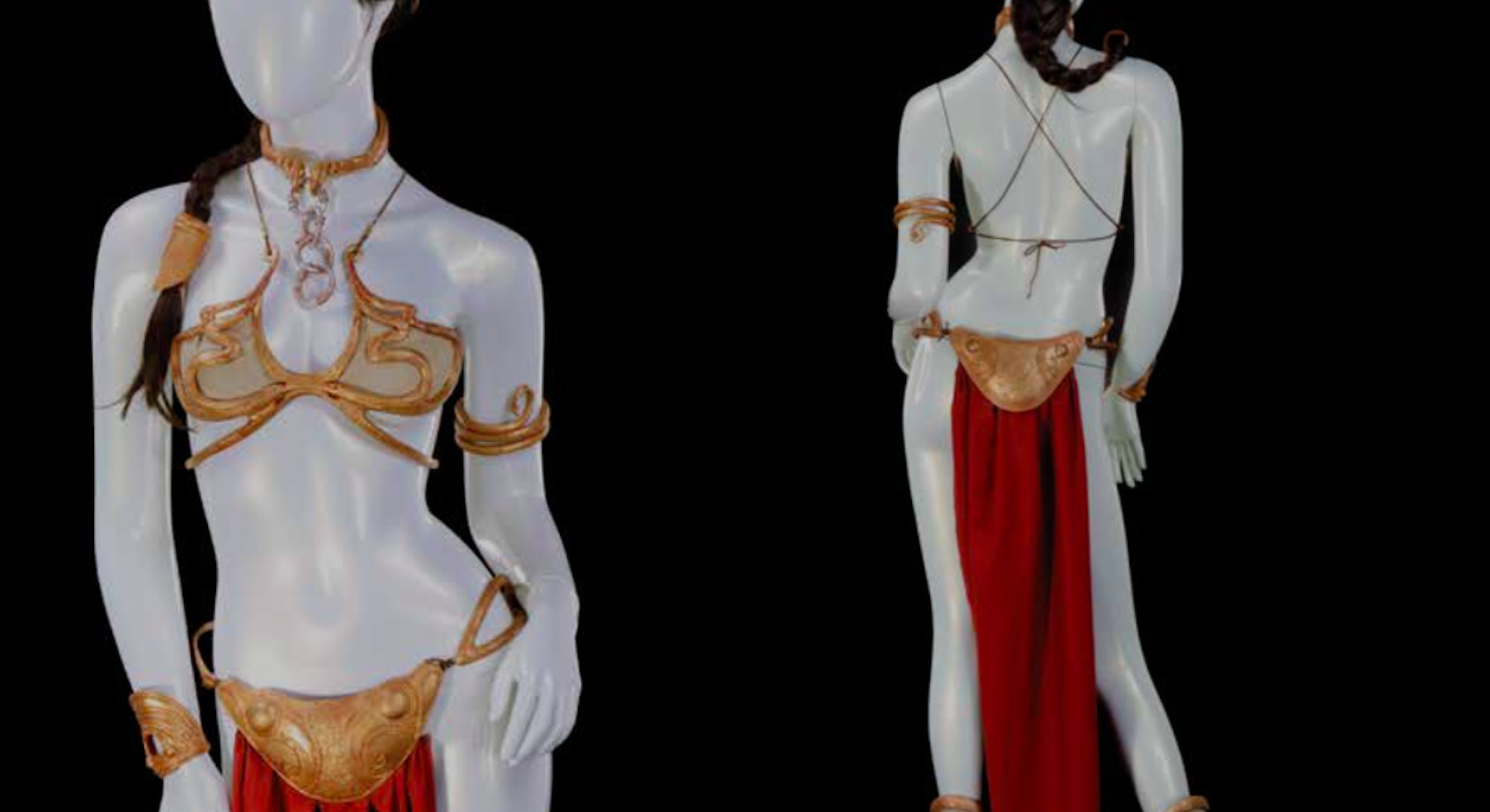 The iconic “slave Leia” costume sold for $96,000 at auction in Los Angeles today, part of a massive lot of items from the Star Wars series put on the block.

“Without question, Carrie Fisher’s “Slave Leia” costume is among the most memorable in the Star Wars franchise. This ensemble represents the most important and complete compilation of original Star Wars pieces to have survived production in private hands. The mannequin is dressed in production made elements distinguishable by their flexible gold-painted red dense-urethane rubber (all fabric parts, as well as the chain, were re-created to match existing photographs.) These original flexible pieces were used on set before being returned to the ILM model shop and replaced by altered versions, since several elements had to be resized due to Carrie Fisher’s weight loss during shooting. In addition to this collection are all of the one-of-a-kind original wax Masters sculptured by artist Richard Miller. They can be differentiated by their extremely delicate wax fabrication common with jewelry making. Also among them are all of the alternate Slave Leia masters first deemed too complex by George Lucas. They can be seen worn by a model in the included series of (6) rare slides still bearing the original name for the film “Revenge of the Jedi.” Also included are several design and paint studies representing the evolution of these costumes’ elements, for instance the front and back bikini plates, as well as the hair piece on the mannequin. Completing the ensemble are a collection of original documents, photos, notes and pencil drawings as well as Carrie Fisher’s measurements used to create the masters. The collection comes with a letter of authenticity by Richard Miller the original designer, sculptor, mold maker and painter for the costume of a 30-year veteran of Industrial Light and Magic. $80,000 — $120,000

Another big-ticket item was the miniature model of the Rebel Blockage Runner, the ship from the opening scene of the first Star Wars. The bidding quickly skyrocketed past the upper limit of the projected value of $300,000, and sold for $450,000.

Other items did not do so well. An original Rebel Fleet Trooper helmet came out with a disappointment. It was pegged at a value of $150,000 to $250,000, but no one came up with the minimum bid. It was designed by John Mollo, who won the Oscar for best costume design for the original Star Wars movie.

A prototype Darth Vader mask, made after A New Hope but ahead of The Empire Strikes Back, suffered the same fate. The seller wanted at least $30,000 but no one ponied up the cash.

So, you know, it’s still available, if you’re interested.

Other smaller items included a third-draft A New Hope script with annotations by George Lucas that sold for $7,800, and R2D2 eye components that also went for $7,800.

A good day, all and all, for the wealthy Star Wars superfan.