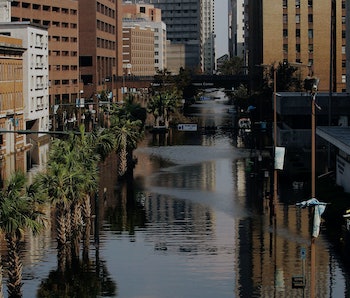 This week at the climate change conference in Paris, 21 cities around the world pledged to spend 10 percent of their annual budgets on projects designed to build the stronger, healthier urban environments of the future.

It’s the boldest initiative to date from 100 Resilient Cities, a group funded by the Rockefeller Foundation, that wants to dramatically change the way cities plan for the future and spend their money.

And this new commitment means a lot of money will be spent — a total of more than $5 billion annually has been promised by the cities involved. Mayors of New Orleans, Oakland, Boulder, Pittsburgh, Norfolk, and Tulsa have all signed on to the idea.

The cash is supposed to go toward building “resilient” cities, meaning cities that are fundamentally healthy in a way that will allow them to bounce back from any disruption — whether that’s a flood, an earthquake, or an economic downturn.

The world is changing at a rapid clip, and cities are particularly vulnerable. Fires, storms, floods, and droughts have become more intense on a warming planet, and population centres need to have the capacity to respond and heal, and they need it now.

What kind of futuristic urban tech will all of that money buy?

You can bet Norfolk, Virginia, will be bolstering its storm and flood management systems. Rising sea level erosion is a major threat to East Coast cities, as climate change takes its toll on beachfront properties. Maybe it will invest in permeable concrete for urban parking lots, alleyways, and highway shoulders. That old tech has seen new interest in recent years as city planners recognize how it saves money on storm water systems, prevents erosion, and filters pollution out of water runoff so it doesn’t get into the water supply. Plus, it looks like magic.

New Orleans is obviously heavily invested in making sure it is ready the next time a Katrina-level storm hits. A lot of resources have already gone into shoring up the levee, but that’s not enough. Louisiana has a 50 year, $50 billion plan for storm prevention, including rebuilding the wetlands that provide the city with some natural cover. Being prepared for the next big storm also means investing in communications and transportation, so that an evacuation plan can be effectively carried out. With 10 percent of the city’s budget pledged to this sort of stuff, you can bet the systems are going to be pretty slick.

In Oakland, municipal officials surely have their thoughts on that mega-quake that everyone says will definitely come at some point. Being prepared for an earthquake means more than strengthening buildings, because what happens after a disaster? Maybe the city will invest in an army of robots and drones to send in as first responders, locating people in need of help and delivering food, water, medicine, and supplies to tight spots where humans can’t safely venture.

Of course, a lot of this stuff is the kind of thing in which cities are already investing. Ten percent of a city’s entire budget seems less significant when you realize that municipal governments are already spending funds with an eye toward the future.

But it’s not just about spending the money, it’s also about spending it in a way that makes sense. Beach nourishment will buy you some time until the next storm, but unless you want to spend that money over and over again in perpetuity, it would be wise to come up with a Plan B.

This resiliency project is a bit like taking care of your health by eating vegetables and exercising, rather than stocking up on the drugs for the illnesses you think you might get.

And if that comes with the fringe benefit of an urban robot army, so be it.