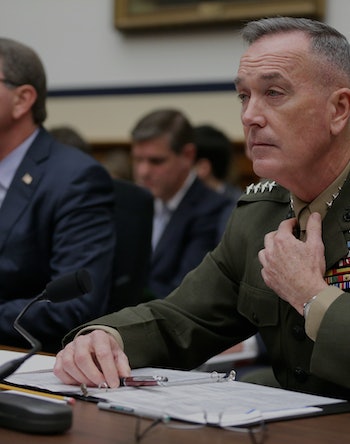 In a telling exchange during a congressional hearing last Tuesday, Virginia Republican Randy Forbes questioned Joseph Dunford, the Chair of the Joint Chiefs of Staff, about the United States’ campaign to destroy ISIS. “You heard the Secretary of Defense say both in writing and verbally that we are at war,” Forbes asked. “Who declared that war?”

Dunford responded that the United States is “mobilizing all of its military capabilities.”

“Who would have actually made a declaration?” Forbes pressed. “Is that something that you would make?”

“Has a declaration been made?” Forbes asked.

“No, it has not,” Dunford responded.

The Representative’s point is well taken, if unoriginal. The U.S. Government has considered itself at war since 9/11, yet that war has not been formally declared. The legal underpinning of what some call the Forever War was not a formal Congressional declaration, but rather a 2001 law called the Authorization for the Use of Military Force.

At 60 words long, passed in the days after 9/11, it has been called the most dangerous sentence in America. The AUMF has justified virtually every U.S. military counterterrorism action over the last 14 years, and remains the legal underpinning of the ever-expanding U.S. air and ground war against ISIS.

Where does the AUMF authorize force? And at what level? Executive branch lawyers are tasked with parsing out whether hostilities in one region or the other rise to the level of armed conflict, and who counts as an al-Qaida associate, but such conversations elide an inescapable conclusion: The U.S. is simultaneously at war, and not at war. In fact, those old binaries may be obsolete for good. We’re now living in the Gray Zone.

It’s a newly deployed term for an old concept. “The Gray Zone […] really defines this area between … for the most part healthy economic, political competition between states, and open warfare,” Army General Joseph Votel, the head of U.S. Special Operations Command, said recently in an interview with the Tampa Tribune.

Votel acknowledges in the interview that for much of the period after WWII, the United States was involved in semi-covert conflicts across the globe. Open war, like in Vietnam or Iraq, was the exception rather than the norm.

Now, it is not just the United States that finds itself in this position. Russia’s annexation of Crimea and the ongoing hostilities in the Ukraine are clear examples of Gray Zone conflict. “They are operating at a level below open warfare with us,” Votel told the Tampa Tribune, “but they’re certainly operating in hybrid approaches where they’re making use of information operations, of surrogates, of ethnic Russians that are in those areas, of their own military forces, of their own special operations capabilities.”

The other clearest example is the multi-country proxy war happening in Syria in addition to that country’s civil war. Turkey’s downing of a Russia fighter jet after it crossed into Turkish airspace is a perfect example of an unsteady middle space between peace and war. President Obama’s recent decision to authorize Special Ops forces to conduct night raids in Iraq – over the objections of Iraqi Prime Minister Haider al-Abadi – also constitutes a Gray Zone approach.

Technological advances, primarily armed drones, are likely to make persistent, low-level conflicts increasingly common. The U.S. counterterrorism campaign in Pakistan – carried out primarily through drones, but also with covert, armed CIA contractors like Raymond Davis – will almost certainly serve as a template when other countries establish their own unmanned vehicle program to cross enemies off of kill lists.

Why is this mode of war so prevalent now, and what are the probable effects it will have? A new report from the U.S. Army War College called Mastering the Grey Zone offers some ideas. For one, all-out world war is unlikely. “While major war remains possible, it poses intense costs and risks, especially among nuclear-armed states,” writes the author, Dr. Michael J Mazarr, Legislative Assistant and Chief Writer in the office of Rep. Dave McCurdy (D-OK).

To avoid those costs and risks, countries will fight Gray Zone conflicts – theoretically waged just below the threshold of a full-blown war. But this global paradigm looks less like peacetime and more like a stand-off, which, according to Mazarr, could “generate a dangerous sense of persistent warfare among major powers; [and] increase the potential for inadvertent conflict and war by miscalculation.” The world is a safer place when you’re not at war, presumably, but made more dangerous when you’re never not not at war.

Another possible outcome is the ostensible dismantling of International Human Rights Law – the peacetime laws that are much more restrictive in the use of force than the laws of war. It’s not lost on the people the United States tasks with fighting this war they they are operating in an uncertain legal and political environment. “In this ‘gray zone,’ we are confronted with ambiguity on the nature of the conflict, the parties involved, and the validity of the legal and political claims at stake,” Gen. Votel said in remarks before Congress in March.

George W. Bush famously referred to terrorists as “evildoers,” and government officials to this day use the term “bad guy” to talk about a military target. But matters of war and peace are never as simple as good and evil. In the Gray Zone, that will be truer than ever.