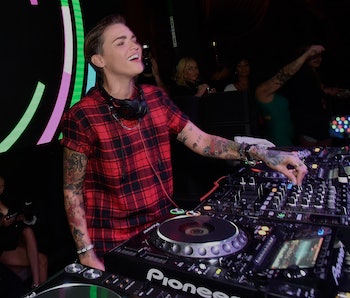 Corporations are people. And people like music. Those musical people want to share their tunes. So they throw their stuff on SoundCloud. Thus, we get Corporate SoundClouds.

Whether they’re promoting podcasts, hosting original compositions, or just squatting on a domain name, the least likely musicians have official accounts to host their audio output. And just because some places are worth billions doesn’t mean they get too many clicks. Goldman Sachs, for instance, has several tracks with single-digit plays. A poor showing, which certainly will not help them in Inverse’s definitive Corporate SoundCloud Power Rankings. (h/t Nick).

American Express hasn’t used its account for about two years now. The credit card giant sits at the bottom of the list, however, because of how seriously it took the SoundCloud endeavor. Its Peace of Mind Playlist has six real tracks and is tagged with #Chillout. Trying too hard is not chill, and thus AmEx is dead last.

Columbia’s Center for New Media Teaching and Learning is perhaps the most justifiable inclusion when it comes down to our fave corps. It’s a place for interaction between faculty and students. That said, a lot of the audio is boring. Like intellectual symphonies. Who wants to hear that when SoundCloud’s got mashups?

Amazon Web Services’s SoundCloud has just three tracks, but plenty of empty playlists. Props for a tech giant not understanding how to use a platform that’s easy for 13-year-olds to use. The songs that are there are lectures about business and technology.

Vistaprint specializes in holiday cards, business cards, and anything stationary. Its SoundCloud? Three songs, all the same song, just cut down to different lengths. My favorite, of course, is the original.

McKinsey & Company is a major consulting firm. The firm’s SoundCloud is a host to its podcast, which has some admittedly interesting topics like gender equality in the workplace and the global economy. Maybe it’s more important than interesting. The host has a sick British accent, though.

Verizon Communications has actual conference calls on its SoundCloud. It’s like you’re in the room with bored board executives and confused assistants. It’s pretty transparent to have full earnings calls online. I can’t wait to catch up on the ones I’ve missed.

Goldman popped up on SoundCloud just two weeks ago, and the investment bank is on a rampage putting its podcast, Exchanges at Goldman Sachs online. It’s doing really well. The hot new track, “A Conversation with Lloyd Blankfein” — Goldman’s CEO! — has literally one listen. Now it has two. I think they’re both me.

IBM actually has a pretty cool SoundCloud account, mostly because of an album it dropped with LCD Soundsystem’s James Murphy last year, Remixes Made With Tennis Data. For the project, IBM used raw data from tennis matches to generate an algorithm that turned each match into a song. Murphy then remixed those songs. They’re not great, but the concept was pretty amazing.

The only thing better than actual songs? GE’s “Raw GE Beats” playlist. Each track is about a second long. They’re “audio emissions used by GE to monitor the health of machines.” It’s literally industrial music. Plus, GE got Matthew Dear to make his own song using GE’s sounds.

More like this
Science
16 hours ago
AI Is Smarter Than Ever – But Some Problems Still Stump Today’s Computers
By The Conversation and Jie Wang
Science
Feb. 1, 2023
7 Years Ago the World Agreed to Slow Down Climate Change — But a New Report Shows an Uneven Future
By Tara Yarlagadda
Gaming
Jan. 24, 2023
Fortnite is about to get a Wild Dreams concert from The Kid LAROI
By Jess Reyes
LEARN SOMETHING NEW EVERY DAY.
Related Tags
Share: