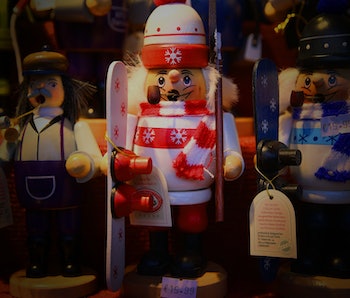 The flights are booked. You bought a bunch of random pajamas, watches, and lightning cables on Amazon over Thanksgiving weekend. You’re headed home for the holidays for a well-earned rest. So, you’ve apparently asked Google or Facebook, how am I supposed to get my stoner routine rolling around my folks?

This is the most important task, clearly. Now, if your family happens to live in Colorado, Oregon, Washington, California, or Miami — because I like to imagine Miami as just one big ball pit, except the rubber orbs are eight balls, and bags of heroin have been in someone’s stomach — you’re set.

If your parents live in less-civilized territory, you have some decisions to make. Driving? You should be good, as long as you’re not driving through Utah, Oklahoma, Kansas, or Nebraska. The cops there will put you in jail until next Christmas for a dimebag. Flying? That’s a whole different deal. The TSA openly says they ain’t searching for your stash:

TSA security officers do not search for marijuana or other drugs. In the event a substance that appears to be marijuana is observed during security screening, TSA will refer the matter to a law enforcement officer.

Whether or not marijuana is considered legal under local law is not relevant to TSA screening because TSA is governed by federal law. Federal law provides no basis to treat medical marijuana any differently than non-medical marijuana.

Even if an item is generally permitted, it may be subject to additional screening or not allowed through the checkpoint if it triggers an alarm during the screening process, appears to have been tampered with, or poses other security concerns. The final decision rests with TSA on whether to allow any items on the plane.

Depending on what kind of a weed network you’ve got going on on the homefront, it might be a risk you want to take. Pop your drugs in the bottom of an opaque bottle of Tylenol, and then test the limits of your heart rate in the security line.

If you’re going back to the hometown empty-handed, you know what to do: Ask the sorts of people who can help. It could be your cousin, Mario, who dropped out of art school. It could be a dude named Glen or Derrick who went to your high school and sells Cutco knives for a living. Astronomical Phish show counts are a good lead. Some dude who has never left town and still works at the Courtyard by Marriott? Even better. Chances are your weed is gonna have more stems than Charlie Brown’s Christmas tree and your sack is gonna be shorter than one of Santa’s elves, but holiday beggars can’t be holiday choosers.

Now that you’ve got your weed, you’re gonna need to figure out what to do with it. Let me offer a suggestion that might’ve been unthinkable years ago: Get your family involved. And, no, not just your goth little sister. I’m talking about your parents, aunts, and uncles. Listen, chances are they’re getting all crunk on eggnog and spiced Christmas ales for the next month. Alcohol is way worse for the human body than marijuana, and if they’ve read a newspaper in the past couple of years, they know this.

They’re also — almost certainly — curious about the new, hip grass that’s stronger than what they had in college (they will comment on this). Make a few weed-related jokes later one evening when you’re playing Cards Against Humanity to gauge the temperature. If a couple of eyebrows get raised — the right way — all you need to do is say, “Well, actually, let me go get something from my luggage really quick….”

Alright, so, maybe you didn’t get your Aunt Jenny to blaze one in front of the fireplace. Your family is not cool. You gotta take this game underground, son. If you have edibles, killer. Just don’t accidentally put them in your nephew’s stocking. Going old school? You should probably just go outside. Pot smells. Smoke it outdoors. You’re an adult. If you get “caught” by your dad when he’s taking out the trash and he gives you some lecture about being under his roof, tell him to get bent.

Another option: Take a trip in the family car to get some, um, milk? Yeah, that’s the ticket. Just roll the windows down, but be wary of any olfactory-enhanced relatives who might be taking the car out for a spin early the next morning.

Oh, it’s too cold for you to smoke outside? Sheesh okay. If you have to hotbox your childhood bedroom, let me offer a few tips. Wait until your parents go to sleep. Then, light up a candle. Get one that’s specifically meant to combat smoke odors. I have one that smells like a cheap citronella bug-defender — so, not great. Still, it fights off smoke, even from cigars. If your parents are pretty big narcs, you might want to take your party into a basement bathroom and blow out a window or into one of those dryer sheet-toilet paper roll rigs. Basically, just do what you did in college, but get caught less. Which, come to think of it, is a pretty decent mantra for life, in general.