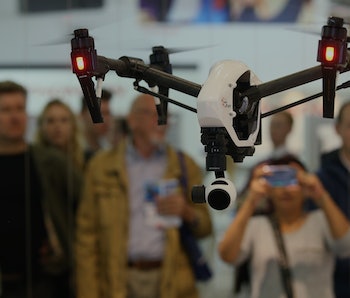 As the Federal Aviation Administration attempts to implement the regulatory and safety issues they pose, drones have become an object of fascination and fear for the public. New technology breeds new concerns about responsibility, practicality, and injury. But there is one group that views drone pilots, not the drones themselves, with skepticism: the model plane flying community. Flyers of unmanned civilian aircraft just don’t see eye-to-eye.

Radio-controlled aircraft were first used by British aeronautics pioneer Archibald Low during remote tests of compressed-air flying machines after World War I. It took decades for a civilian rollout, but hobbyist RC aircraft groups have been around for decades. Now, those groups find themselves waist-deep in a debate about airspace and privacy concerns. Some of them waded in, but others just got dropped in unfamiliar waters.

“It’s a bit of a mixed bag,” Richard Hanson of the Academy of Model Aeronautics, tells Inverse. “There is a large number of members who are wary of the users of this technology going out and doing stupid things and giving a bad name to our hobby.”

The 80-year-old AMA views drones as an adjunct to the aircraft hobby and some members are enthusiastic about the new tech, which is seemingly behind the organization’s growth. Others would prefer the paradigm remain unshifted. Given the newness of drones and the relative smallness of the RCA community, reputation is a big deal. When a civilian drone got in the way of a medical helicopter, hobbyist forums were ablaze with criticism for the inexperienced pilot.

That pilot, without knowing it, had joined a community way older than drone technology. The reason? The Federal Aviation Administration declines to discern the difference between a quadcopter and radio-controlled aircraft and has recommended the registration of any aircraft weighing over 250 grams. In the eyes of the model aircraft community, the key difference between the UAV types is obvious: Unlike RC planes, many consumer drones can fly out of their operators’ line of sight using GPS. Viewed this way, model aircraft have more in common with kites than drones. RC pilots and drone flyers engage in very different activities, motivated by very different impulses.

Hanson points out that the way that people get into flying quadcopters is extremely different from the way that people get into flying radio-controlled planes. “People who are buying these aren’t traditional model-aircraft people, for the most part, so they don’t know the type of safety environment we operate in,” he says. “They’re not aviators.” Where an RC novice might come across a local group of enthusiasts or snag that initial model airplane from a hobby shop, the average first-time drone buyer is making the purchase online. The barrier to entry is considerably lower.

“People who take drones out of the box and fly them — they have to know they are fallible,” says Hanson. “They’re not bulletproof.”

To be fair, the vast majority of people who fly drones don’t do stupid things and many quadcopter flyers are keenly aware of the (overstated) dangers of their hobby. The top, stickied post currently at Reddit’s dedicated DJI Phantom drone forum? A discussion on how not to contribute to the bad rep of DJI owners. The two big takeaways: Practice in open spaces away from people, and “read the fucking manual.”

From the perspective of the model aircraft community, drone pilots have jeopardized the future of a great hobby. The question is whether or not bad drone pilots can be stopped and, if the federal government needs to do the stopping, what that will mean for everyone else.