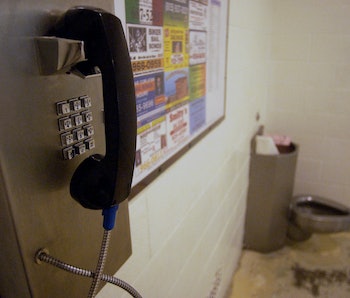 As the biggest prison telecom company in America, Securus Technologies hasn’t had the best year. First, the FCC told the Dallas tech firm to cap its prison call rates, then The Intercept accused it of violating inmate rights by recording prisoner conversations with attorneys, which were supposed to be private. Now Securus is getting hammered by critics for patenting a robocall system that dials inmates’ relatives to ask if they want to pay to talk to their loved ones.

The patent counts off a three-step system to ask inmates relatives to set up an account: find a “prospective third-party payer,” identify a “campaign triggering event” (i.e. an inmate being booked), then initiate “a campaign to proactively contact” the third-party via “interactive voice response system.”

The Electronic Frontier Foundation mocked the patent as a simple matter of “finding someone to pay a bill.”

“There’s this perverse thing where sometimes the more obvious a thing is, the harder it is to prove it’s been awarded a patent improperly because it’s so obvious that no one would write it down so there’s no documentation,” said EFF staff attorney Daniel Nazer. “No one is going to write in a technical article, ‘hey it might be a good idea to reach out to people to pay for services,’ because that’s so obvious.”

Securus is no stranger to patent court: It has issued over 130 patents with at least 80 more pending. The company is also an undefeated 16-0 when it comes to patent challenges from industry competitors.

“This is the kind of business where it’s easy to get a monopoly once you win that one bid,” Nazer says. “It’s like inmates get a choice in who the provider is.”

Indeed. And judging by the lengths Securus goes to to keep its hold on communicating behind bars, keeping people in touch with their imprisoned relatives is a lucrative field.

More like this
Innovation
4 hours ago
Scientists at CERN have discovered too many particles for physics to keep up
By Harry Cliff, Tim Gershon and The Conversation
Innovation
6 minutes ago
Mars City: 3 Red Planet resources could forge a critical building material
By CAROLYN COLLINS PETERSEN and Universe Today
Innovation
8.12.2022 10:30 AM
Will Miami exist in 2050? 4 strategies could keep U.S. coastal cities afloat
By James Gaines
Share: