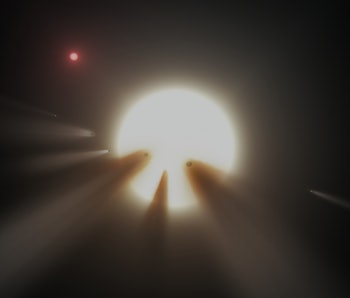 Last month, the world got super-hyped about the potential discovery of alien ‘megastructures’ floating around a distant star 1,480 light years away. The Kepler telescope was picking up some strange patterns of light that suggested maybe — just maybe — we were seeing something massive built by an intelligent alien civilization.

Sorry to burst your bubbles, but that’s probably not the case. It turns out the structures in question — hovering around the star KIC 8462852 sitting between the constellations Lyra and Cygnus — are probably just a gigantic swarm of comets, according to new data acquired by NASA’s Spitzer Space Telescope and analyzed by a team of researchers around the country.

Bummer, right? We all hoped it was signs of a galactic empire on the horizon. Now we’ll just have to settle for a weird family of objects made of ice and rock zooming around at hundreds of thousands of miles per hour.

The mystery first began when NASA’s Kepler spacecraft was observing KIC 8462852, and started picking up a strange dimming and brightening of the light that had never before been observed elsewhere. The most likely explanation was some asteroid fragments, but Jason Wright, a Penn State University astronomer, put forth a highly improbable theory that maybe the structures were evidence of alien megastructures. Of course, Wright was skeptical, too, telling Inverse that the likelihood of alien life being responsible for the light patterns was “very low.”

To confirm any of the hypotheses about what was causing this space flickering, scientists needed more data. Kepler can only observe space in visible light. So researchers turned to Spitzer, which is able to detect infrared light coming off the warm dust resulting from rocky collisions between asteroids or other objects.

Spitzer couldn’t find any excess signs of infrared light coming off the warm dust, leading the scientists to believe the strange light patterns were probably caused by cold comets — a family of them traveling in a weird, long orbit around the star.

The infrared data makes the comet theory more likely, but more data will need to be gathered in order to actually prove it. “This is a very strange star,” Massimo Marengo, an astronomer from Iowa State University, Ames, and the lead author of the study, said in a press release. “It reminds me of when we first discovered pulsars. They were emitting odd signals nobody had ever seen before, and the first one discovered was named LGM-1 after ‘Little Green Men.’” Those signals, it turned out, were just the result of natural phenomena.

The comets’ weird behavior does raise a lot of questions. Certainly alien intervention isn’t out of the question yet. Keep your hopes up people. The truth is out there.

More like this
Science
9 hours ago
Ancient humans forged hybrid species at critical periods in our evolution
By Penny Spikins and The Conversation
Science
Sep. 24, 2022
Is a fact always true? A philosopher explains how to spot the difference
By Peter Vickers and The Conversation
Science
Sep. 23, 2022
We finally know how many ants are crawling the Earth right now
By Jennifer Walter
Related Tags
Share: