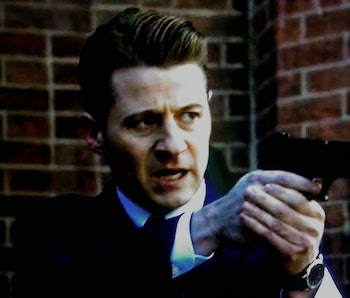 Gotham is the tale of the city so bad it spawned Batman — and of James Gordon, the cop who would go on to be a great ally of The Dark Knight…but was once just a detective who had to deal with all of the Caped Crusader’s enemies when they were just proto-villains.

The story is once again dark and rich — here’s what happened on last night’s episode:

Jim shows up at Blackgate Prison to see the incarcerated Theo Galavan (in jail for the kidnapping of former Mayor James) after attending the funeral of the policewoman who was killed by a Galavan assassin who meant to kill Jim—who Jim could have snuffed but didn’t. He tells Galavan he’s going to his trial tomorrow, but the inmate seems unimpressed, smiling—and Jim later tells Lee he senses something is wrong, that Galavan had the look of someone not going to jail…

…and Theo’s family cult, The Order of Saint Dumas, is in town, on the offensive.

Bruce goes to see Silver St. Cloud to try and trick her into getting Galavan to reveal if he knows who killed Bruce’s parents, with Selina supervising, hiding in the trees. Bruce tries to bargain with Silver to get Galavan to give the name of who killed his parents — he then tells her a secret Selina can’t hear from above, and gives her a kiss—and she offers to meet him later with whatever she comes up with. However, bad guys are following Bruce, and they soon pull up in a van, with Silver kidnapped, telling him to get in…or else.

Harvey Bullock tells Jim that Galavan was trying to purchase a massage parlor once a St. Dumas abbey — the two show up at the parlor and find both a murder and a murdering monk. Jim stabs the monk with his own knife, but the monk takes it like it’s no big thing, heads out to the street and drops this on Jim:

“The day of reckoning is at hand…the blood of nine will wash away the sin. And Gotham will be cleansed…” then jumps in front of a truck.

Lee, Harvey, and Jim realize there are now seven dead (remember “blood of the nine”), and that the monks use blood for purification and blessings. Jim figures out the clandestine monks are using the sewers to move around undetected. Lee then tries to chat with Ed, who’s on the phone. Ed tells Lee that Kristin Kringle left him and left town. Lee backs off, the phone call turns out to be Penguin, holed up at Ed’s spot, looking for mustard in the fridge.

Bruce and Silver are tied up somewhere outside of Gotham. The kidnapper tells them they are both going to get seriously beat until someone rats on Galavan, and explain what Theo knows about the deaths of Bruce’s parents. Bruce gets dragged off into another room. When the bad guys eventually come back for Silver (minus Bruce), she panics and admits the man who killed Bruce’s parents is “M. Malone” — information Galavan was sitting on — but then threatens the kidnappers with revenge by her uncle Theo…yet, as it turns out the kidnappers work for Bruce. Bruce is fine and then lets Silver know he’s been on to her. Silver says Galavan will kill her for this, but Bruce just gives her an icy stare. It’s a dark moment.

Jim and Harvey find a subterranean St. Dumas altar, another murder victim (that’s EIGHT) and another monk, who whispers the same “day of reckoning…” thing. The monk gets injured; Jim fools the monk into mentioning “The Son of Gotham” is in trouble. (The son would be NINE.)

Alfred shows up at Silver’s apartment to find Bruce — he’s not there, but Tabitha Galavan (AKA Tigress) is. The two tussle, Alfred handles her well but she still manages to stab him and throw a knife in his back before he jumps into a garbage truck and gets away.

The trial is on — where former mayor James says it wasn’t Galavan who did the kidnapping, but Penguin. Galavan smiles (again), everyone else grimaces but the judge dismisses the case. Galavan announces to the crowd he harbors no ill will against Jim or the police, and then Jim punches him.

Cops pull Jim out, but instead of arresting him, they stun-gun him and drag him…somewhere.

Bruce and Selina get back to Wayne Manor. The two chat about what’s next, and Selina asks about the whisper to Silver. Bruce says he told Silver he never met anyone like her, and “felt tied to her,” but hints this is really how he feels about Selina. Selina compliments his new darker ways, but warns him not to change too much.

Galavan has Jim tied up. Galavan admits the Order of St, Dumas has protected his family for centuries, admitting his family’s real name is Dumas and that all the things that he feels Gotham has done to his forefathers will be atoned for, then reveals he has wicked fighting skills by kicking Jim’s butt…and smiles (again!)

…then shows up at Wayne Manor, looking for Bruce. He finds him…and smiles (AGAIN).

Penguin rescues Jim, looking for Galavan, and then beats Jim some more.

More like this
Gaming
Jan. 25, 2023
"Mindboggling" Launcher layoffs prompt outcry and tributes to WaPo gaming vertical
By Jess Reyes
Entertainment
Jan. 12, 2023
The Batman 2 will be set up by HBO's The Penguin, director reveals
By Eric Francisco
Culture
Jan. 23, 2023
5 years ago, DC released the best Batman movie you haven't seen
By Laura Kelly
LEARN SOMETHING NEW EVERY DAY.
Related Tags
Share: