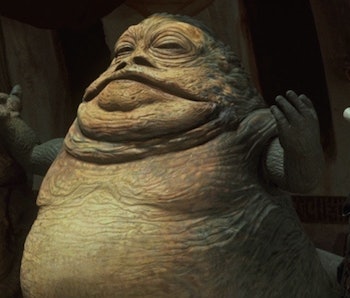 The Star Wars movies are nothing if not tame. These modern myths take on some fairly hefty themes in the emotional department, not to mention the constantly shifting battle between good and evil, but it’s all done in a literally PG-rated world (or in the case of Revenge of the Sith: PG-13) where there’s no blood, no onscreen sex, and no swearing. Or is there?

Two-out-of-three ain’t bad as they say, since it turns out George Lucas’ brainchild and J.J. Abrams’ new adopted baby is filled with some fairly stellar cuss words to use around the dinner table this Thanksgiving.

A good cuss word is rare within the canon of films, but if you listen closely they’re there. Otherwise, when thinking about the best way to tell someone off without grunting like a Wookiee, we have to look to the Expanded Universe. It may not be good for much, and at worst the EU just adds on confusing and often contradictory tangents to the Star Wars movies. But it is good at rounding out the saucy language in the galaxy far, far away.

There are enough random examples of slang to fill an entire book (in fact it’s been done already), but here are some of our favorites. After all, the whole universe can’t be rated PG, can it?

This one is relatively tame, even by the standards of the Star Wars saga. Unfortunately a “nerf herder” doesn’t refer to constantly having to try and collect styrofoam darts from little plastic toy guns. Instead, Leia calling Han a nerf herder refers to a group of lower class farmers who herd nerfs, a horned herbivore mammal in Star Wars lore. Leia’s comment is more a dig at the simple-minded folk than anything, so really she should just check her privilege before spouting off insults like this.

This is another obvious one, though its inclusion itself is kind of strange. Question: There’s a hell in the Star Wars universe? And does this mean the Jedi have a Judeo-Christian type religious understanding of heaven and hell? It’s best not to get too caught up in these types of instances. It’s just like when Star Wars fans freaked out over Captain Panaka saying, “If we can’t get the shield generator fixed, we’ll be sitting ducks,” in The Phantom Menace. Since when are there ducks in Star Wars?

The video above gets the connotation right, but “poodoo” doesn’t necessarily translate to the F-word. Instead, it allegedly translates to “fodder” in Huttese, the language spoken by Jabba the Hutt. The podracer, Sebulba, uses it above when he crashes after the race, and he uses it before to taunt little Anakin, basically telling him he’ll be fodder for a Bantha, those huge elephant-like beasts ridden by Tusken Raiders.

The Hutts get all the best cuss words. Echuta, or “E chu ta,” is an untranslatable insult, which makes it the wildcard of all Star Wars cuss words. Use it anyway you like, just make sure you want the person (or droid) you’re saying it to to feel disparaged. Here’s one to try: “Honey, come downstairs for dinner!” “No mom, echuta!” Or what about, “I don’t think this relationship is working out,” “Oh yeah, well, echuta!” See, works every time.

We’re squarely in EU territory now, and as stated there are so many cuss words found there that we could just keep going on and on. Instead, we’ll be brief. “Kark” is another multipurpose swear word that we like too. According to Wookieepedia, it was a word used a lot by people with names like Jos Vondar, Kornell Divini, Olzal Erne, the hilariously named Villian Dance, and more. Who are these people? Beats us. What does it mean exactly? Well, like “echuta,” it isn’t able to be translated, but think of other four-letter cuss word homophones and you can basically guess what it means.

Ahh Attack of the Clones. The worst Star Wars movie there is, but at least it has a primo semi-cuss word. Used by shape-shifting bounty hunter Zam Wessell, “sleemo” is her last word before shifting off this mortal prequel coil. Again a Huttese word, “sleemo” translates to something akin to “slimeball” and can refer to an EU group of pirates called Sleemos.