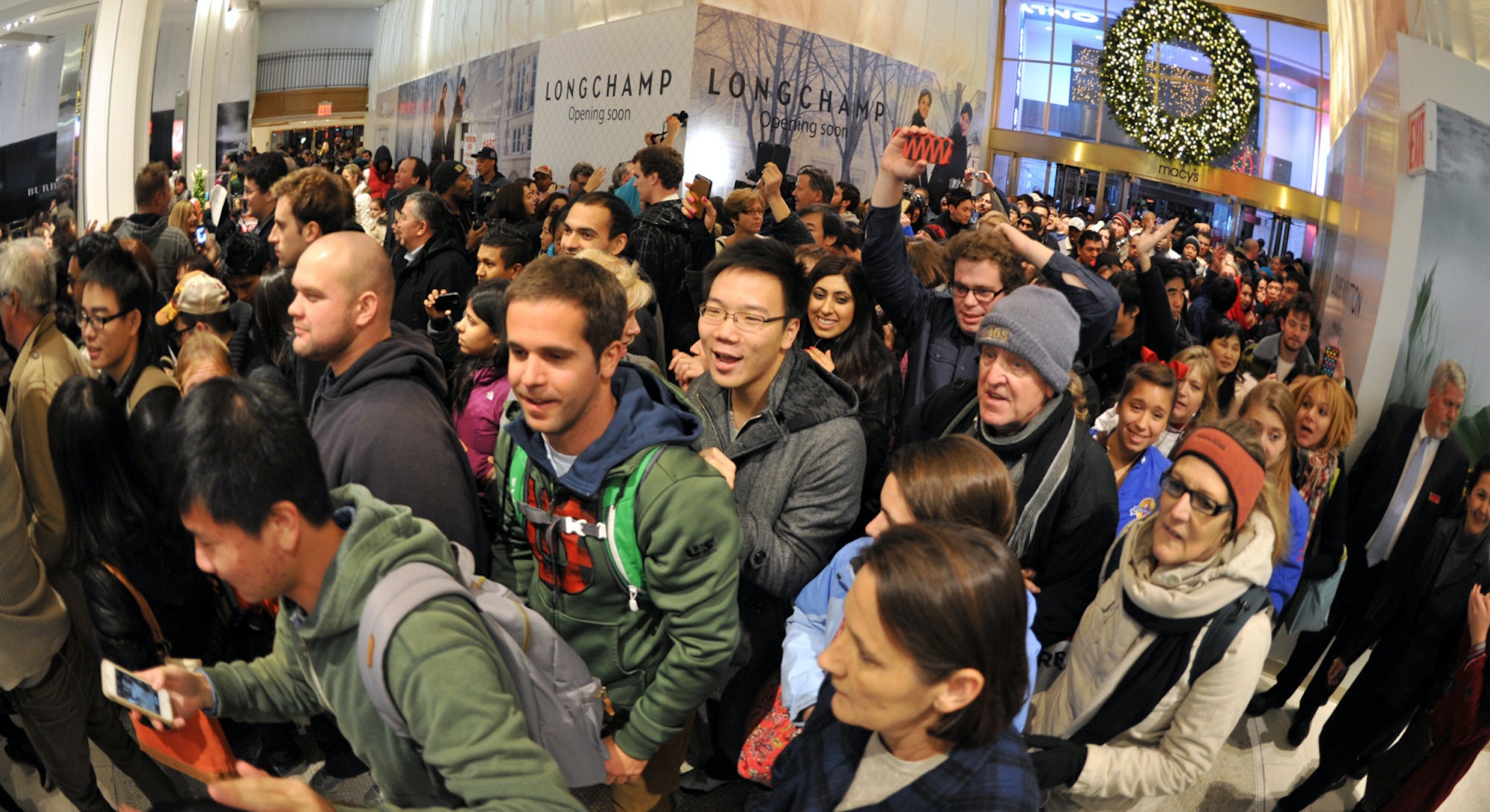 ‘Twas the Day after Thanksgiving at the town mall,

Time for Black Friday deals, Christmas presents for all;

Employees hung signage by the displays with care,

With the knowledge half the city soon would be there;

The shoppers were snug, pack’d tightly in lines,

There we stood, post-Thanksgiving hangovers galore,

Jockeying to see who’d be the first through the doors;

When up to the front walk’d the guard with the keys:

No time for manners! There is shit to be buyin’!

To Sephora they bolted, to Coach they hurry’d,

To Gap they sprinted, to Old Navy they scurry’d,

All those great deals, there was no time to amble,

Fifty percent off all computers and TVs!

All appliances on sale, buy one get one free!

I try’d to get my bearings, oh, where to begin?

Fuck, I forgot my list! Dread began to set in.

I thought I could remember, hold on now let’s see,

Which toys did the kid want, what size are his jeans?

What brand of organic knitting yarn for Aunt Pearl?

Which color Shake Weight should I get Uncle Merle?

I didn’t wake up at a quarter past four,

And search for a parking spot for two hours more,

To come to this hell hole and leave empty-handed,

This was a plan I simply could not abandon.

It was still too early to throw in the towel yet,

But fuck it. At this point, everyone gets what they get.

First things first, find the bathroom! I needed to pee,

Probably shouldn’t have had that sixth cup of tea;

I enter’d the men’s room and lo, what did I find?

None other than Mall Santa snorting a line;

He had bloodshot red eyes and booze on his breath,

When out a stall popp’d an elf clearly on meth;

“You wanna buy some weed? For holiday spirit?”

In one swift motion, back out into the carnage I flew,

Leaving Jolly Ol’ Saint Nick and his elf in the loo.

When at Bed Bath & Beyond there arose such a clatter,

I sprang over to bedding to see what was the matter.

There was a yell and a scream: “Quick, call the police!”

An old lady got shank’d over discounted sheets;

To promptly mace a group tangling over duvets;

As pepper spray fill’d the air, my lungs, and my eyes;

There were still more sales, more deals to uncover!

I start’d towards Macy’s to find my mother-in-law socks,

When I was grabb’d by the douche at the cellphone kiosk;

“Hey bro! Over here, I’ve got what you need!

I politely declined, said, “Sorry but, no!”

So I twisted and turn’d until I got free,

And slamm’d into a man the size of a tree;

“Let’s talk about this sir, I have three kids and a wife!”

My plea fell on deaf ears, he lifted me over his head,

And stuck me head first in a trash bin instead.

I pick’d myself up, and walk’d around in a daze,

Someone had set the Orange Julius ablaze.

A brawl over PlayStations, a scrap over a purse,

While a dudebro riot broke out over Ed Hardy shirts;

I watched two old men using their canes like swords,

To see who could claim the very last Hoverboard;

Greedy shoppers lock’d themselves inside Toys-R-Us,

While a triage center was erect’d outside Sunglass Hut;

I headed for the exit, my eyes swelling shut,

With what felt like cracked ribs — man, enough is enough;

The presents could wait, I will admit I gave up,

There is no one on Earth that I love that damn much;

Everyone in the mall had lost their everloving minds,

Black Friday is a pox on the whole of mankind!

As I walked out the door, I encountered a man,

With a cigarette in his ear, a red apron in hand;

His eyes — how they twinkl’d! But why was he smilin’?

“I just quit today, G, man them cats was wildin’!”

This soon before Christmas? That sounds pretty rough —

“Fuck all that noise, bruh, they don’t pay nearly enough!”

And he told me the story of how he had been

On shift since last night from about 9 p.m.;

But no amount of money could get him to stay

In a place where people act like they had an affliction,

But what about the savings, the bargain, the steals?

Surely, it’s worth it to get the right deals?

“Do you even internet bro? Same discounts online.

And shipping is free if you Amazon Prime!”

He was right: no need for riots, fights, or meth-addled elves;

You get the same deals from laptop, tablet, or phone —

Happy Black Friday to all, next year stay the fuck home!