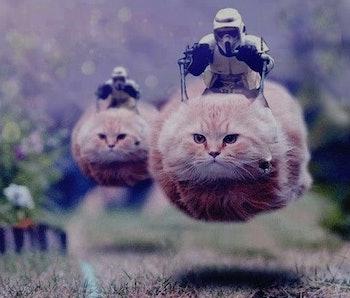 After the series of deadly terrorist attacks that throttled Paris on November 13, authorities in Belgium are sweeping the capital city of Brussels with a string of raids, meant to ferret out another potential attack that’s been deemed “very serious and imminent,” by Prime Minister Charles Michel.

While life in Brussels has suddenly been stymied by a state-instituted lockdown, the Belgian national-consciousness isn’t cowering. In fact, Belgians are responding to crisis with a web-centric humor that speaks to the most undeniable trope on the internet: silly cat pictures.

Search for #BrusselsLockdown on Twitter, and among the news articles, you’ll find a legion of goofy cats, placed in situations meant to simultaneously mock and throw shade at the threat of terror.

The flood of cat pictures came in response to Belgian authorities asking for a social media blackout on Sunday, so law enforcement could ostensibly work on its own to conduct raids without fear of citizen involvement.

It seems though that the internet, in sterling form, did not oblige.

More like this
Innovation
8.15.2022 1:33 AM
47 popular home upgrades people are making that are under $35 on Amazon
By Christina X. Wood
Innovation
20 hours ago
Tesla software updates reveal a potential roadblock to electric vehicles’ expansion
By Vivek Astvansh and The Conversation
Innovation
13 hours ago
This high-tech camera may help protect our identities — here's how it works
By Molly Glick
Related Tags
Share: