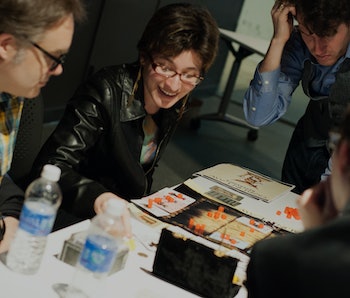 My challenger and I approach the controls. We choose our characters — he the Mechanic, I the Hitwoman — and find ourselves crouching in tall grass, tracking each other for the kill. The Mechanic gets the drop on me when his bear trap springs shut on my foot. In round two, I feint an attack, sneak behind him and wrap my garrote around his throat. Now for the tiebreaker. We spy each other from across the map, he rushes me, I pull out my pistol, take aim, and gun him down.

“I’ve never seen someone win with the gun before,” he says. Victory is sweet.

This is Winnie Song’s video game BADBLOOD, a hide-and-seek-inspired kill fest that Song developed while she was earning her MFA from New York University’s Game Center. It’s just one of dozens of games designed and built by Game Center students; BADBLOOD has the distinction of being available right now on Steam.

When I visited the Game Center, BADBLOOD was queued up on a retro, arcade-style console, complete with joysticks and an attack pad of circular buttons. It wasn’t the only game sitting out waiting to be played. Beside it was Killer Queen, and while I was playing BADBLOOD a nearby crowd of students played a selection of games from the Game Center’s library.

The Game Center is based in an eighth-floor complex in downtown Brooklyn called MAGNET, the Media and Games Network. MAGNET feels like the love child of a software startup and a board game cafe. Any of the blank walls can be used as a screen for one of the countless projectors hanging from the ceiling. Scattered through the complex are “prototyping carts” stocked with board game components. In the kitchen, someone has transformed a long tabletop into an impromptu ping-pong table.

I get the feeling that this is exactly the ethos the Game Center is shooting for: hip, fun, productive-as-hell, and more than a little nerdy. Indeed, as Jessica Lam, the Game Center’s departmental administrator, tells me: “There’s definitely been LARPing on this floor.”

The Game Center project has been in the offing for a number of years, but only recently graduated its second crop of MFA students, and the first BFA students entered the program this fall. NYU launched the Game Center back in 2008 after it received an anonymous donation earmarked to make NYU the hot spot in game design.

It may just be my prejudice, but when I think “game developers,” I think of a team of programmers laboring at their code. But the Game Center degrees are not programs in coding — they’re fine arts degrees that require students to play, study, and understand games from the entire history of human play: chess and Go, The Legend of Zelda and Centipede.

“You need to know the history of games,” Lam says. “If someone comes to you and says, ‘I want to make a game with a Fallout aesthetic,’ you need to know what that means.”

Dylan McKenzie, the Game Center’s administrative coordinator, was a student at NYU when the Game Center got its start. He’s watched the Center grow and knows how far it has come: from a few classes here and there, to a minor, to a Master’s program, and now to a Bachelor’s program. But some things don’t change.

“From the very beginning, coded into our DNA is that this is an art school,” McKenzie says. “We’re shoulder-to-shoulder with film, dance, painting and sculpture … So we think of games as a cultural form.”

All Game Center students need to learn some coding, but “what we’re going to give you is something different than the vocational, computer science with a twist that a lot of programs give you,” McKenzie says. The emphasis is on design more than on development or coding. And to design good games, you need to play good games. And you can do that every week at the Game Center’s “Playtest Thursdays.” Play well, or yours could be the next digital corpse in the tall grass.