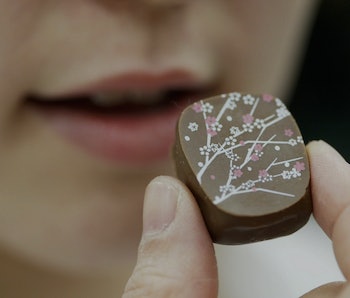 Chocolate is already the best — so when we heard that it might get even better, we were skeptical.

Researchers in Belgium (of course) have discovered that microbes can hugely impact chocolate’s aroma and flavor. One of the vital parts of chocolate production lays in the fermentation process, and microbes that make their way into the unprocessed cocoa can make all the difference. It turns out that the yeast used in the cocoa fermentation can be specially selected so it creates an aroma and taste in chocolate that’s similar to how the flavors of wine, coffee, and tea are engineered.

In a study just published in Applied and Environmental Microbiology, researchers from University of Leuven and Flanders Institute for Biotechnology developed a new Saccharomyces cerevisiae hybrid microbe starter culture that they used early on in the chocolate-making process to alter the flavor of the soon-to-be-sweet treat. They also worked with one of the largest cocoa manufacturers in the world, Barry Callebaut, to develop various hybrids.

There are industries in which microbial starter cultures are streamlined to promote consistency — however, the choco-industry isn’t one of them. Chocolate fermentation relies on a spontaneous process with natural microbiota at the cocoa farms.

Once cocoa beans are harvested, they’re heaped into large plastic vats where they are surrounded by a mushy pulp containing both yeast and bacteria. Since the fermentation process is taking place on the cocoa farms, there’s a high chance of just about any type of microbes getting into the pulp. However, the research team found that their “robust” hybrid microbe was able to outlast all the other microbes.

The S. cerevisiae microbes they developed combined thermotolerance and efficient cocoa pulp fermentation to create chocolate that didn’t actually taste that great. However, when the researchers tried different strains of that same yeasty microbe, they found that the flavors from batch to batch were wildly different. While the chocolate-making methods were exactly the same from batch to batch, they determined that the one changing variable (the new, hybrid microbes) were the reason each chocolate’s taste varied so much.

Eventually, they were able to create yeast strain hybrids that had the ability to dominate cocoa fermentations and to produce specific flavors.

“This means that for the first time, chocolate makers have a broad portfolio of different yeast strains that are all producing different flavors,” says Jan Steensels, one of the study’s lead researchers.