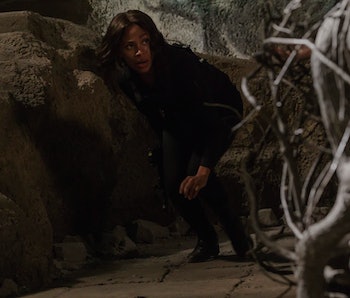 Rag on superhero TV all you want, at least its main characters have identities. You have to be a dolt to confuse Daredevil with Supergirl, but network procedurals? Please.

Sleepy Hollow wasn’t supposed to be uttered in the same breath as the shapeless Blue Bloods or CSI or Castle. Sleepy Hollow was positioned as a prestige genre on broadcast. It had all the makings of something special: two black female leads, a British co-star playing the “fish out of water,” a gothic spin on colonial America, and an endgame. Ultimately, Sleepy Hollow was supposed to go somewhere.

What the hell happened?

“Novus Ordo Seclorum” was the midseason finale of this season which I was utterly surprised to realize. (I don’t pay attention when the bumpers tell me how many weeks are left.) For the first 50 minutes it plays like the worst filler. I had no stock in the monster — sorry, God — that Pandora was awakening, nor did I think much of Abbie’s weekly spat with her ex-now-boss Agent Reynolds. Not even Crane’s mandatory encounter with modern absurdities was any good (This week a college frat, and a terrible one because what frat has a live swing band at a toga party?) This week, like a lot of weeks, Sleepy Hollow was running on a treadmill.

When Abbie turned in her badge and gun, it still didn’t register. She’ll get it back, I thought. Otherwise, why… Just why? And then, she died.

In an interview with Variety, showrunner Clifton Campbell played coy with whether or not Abbie is actually dead.

Variety: Death is rarely permanent in “Sleepy Hollow,” so should fans be looking at Abbie’s return as a question of when and how, not if?

Campbell: I don’t want to tell the audience how they should be looking at it. [Laughs.] I think, like all of us, they should enjoy the episode for what it’s worth and embrace the sacrifice that Abbie Mills makes, not only for her sister but for Crane and this world that they’re inhabiting, and just be utterly and completely surprised at how everybody reacts to this gigantic sacrifice that she makes.

“Of course she fucking lives,” is how I read that. Unlike Scott Gimple’s statement regarding Glenn’s well-being on The Walking Dead the week he, ahem, totally fucking died, Campbell is awfully terrible at playing mystery.

But why the suspense? Is Sleepy Hollow desperate in the ratings game? (Maybe. It’s the Great Pumpkin, Charlie Brown beat out the Sleepy Hollow/Bones crossover.) If so, it’s a short-sighted, short-term play that will bite Sleepy Hollow in the long-run. Presuming to kill your lead isn’t how you stand out from other TV and drum up ratings: Just good stories do.

Abbie’s death had little to no foreshadowing. Maybe turning in her badge and gun, but if that signaled death then no cop from ‘80s action movies would make it to the end. Maybe Abbie and Crane reminiscing on their past adventures, which only served to remind viewers of the times the show was much better. Otherwise, her (alleged!) demise came out of nowhere. The threat of the stone was only introduced last week, with little else to indicate this would be Abbie’s doom. That’s not how major characters are supposed to go.

Revealing the Headless Horseman to be Abraham, Ichabod Crane’s best friend, last season was the worst play Sleepy Hollow has ever done. With nowhere else to take the character, this season swept him under the rug even though he was its second best asset (The first used to be Crane, but he’s been dull). Without the SAVAGE Headless Horseman, Sleepy Hollow has gone full speed ahead on adopting a monster of the week formula (reminiscent of Buffy) which categorizes Sleepy Hollow comfortably with the rest of genre procedurals like Supernatural.

More like this
Mind and Body
1 hour ago
These two daily activities are wreaking havoc on teens’ sleep
By Horacio de la Iglesia and The Conversation
Mind and Body
Sep. 21, 2022
Is someone you care about going through a medical crisis? Here’s how to best support them
By Katie MacBride
Mind and Body
Sep. 20, 2022
What are the side effects of the new Covid-19 bivalent booster? Here’s what you need to know
By Miriam Fauzia
Share: