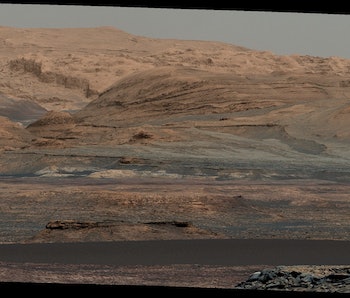 NASA’s Curiosity rover has had quite the time zipping around Mars for a little over three years now. Next up on its adventures is a visit to the “Bagnold Dunes,” a mountainous area that’s never been visited by any rover before. NASA announced Monday that the rover had already made it to 200 yards out from reaching “Dune 1.”

Though Mars is — relative to the Earth — a desolate environment, the dunes still move as much as three feet every year. Some on Mars are as tall as a two-story building and as large as a football field. No non-Earth dunes have previously been visited by manmade equipment (or humans).

The hope in studying the Bagnold Dunes is to get a better understanding of the geological history of the Martian rock. Learning how the sandstone layers that comprise the dunes were turned into rock billions of years ago will help shed more light on how Mars transformed from an ocean-rich planet that may have been capable of sustaining life, into a dry and cold red rock.

Curiosity will have the entire dune site to itself to explore before NASA sends it off to some other unexplored spectacle sitting on the surface of the red planet. Just five more years till the Mars 2020 Rover can join it and keep it company.