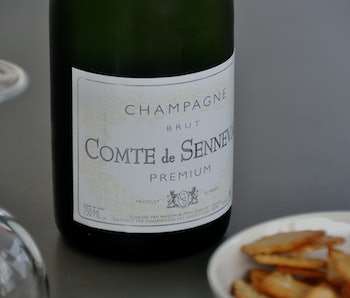 Hasn’t this happened to everybody? You’re at a friend’s wedding and it’s your job to open the celebratory bottle of Champagne. That’s all well and good, you say to yourself, but merely uncorking it is so passé. Instead, you grab the bottle by the neck and hurl it against a wall. What, that hasn’t happened to you? Well it happened to this guy:

Right in the hip, was it? Maybe in the car keys, or the iPhone? That’s gotta hurt.

But how much did it hurt? For help with that question I turned to Dr. Gabriel Xu, a plasma physicist at the Propulsion Research Center at the University of Alabama in Huntsville. Why did I ask a rocket scientist to help me with Inverse homework? Let’s just say that a rocket scientist is the right guy to turn to when your champagne goes from being party fuel to bottle propellant.

The instant that bottle hits the wall, it becomes a rocket. That may sound grandiose, but it’s entirely — if pedantically — correct. As NASA explains it:

In our case, a mixture of carbon dioxide and liquid courage rushes out of the bottle, pushing the bottle forward. The force on the bottle and the force on the propellant compose an “action-reaction pair,” in physics parlance. And in typical physics fashion, we’re neglecting gravity and air resistance from here on out.

The math involved is only slightly more sophisticated than this:

Rockets obey the Rocket Equation, which looks like this

Here’s where I got stuck. It wasn’t immediately obvious to me how to calculate v and dm/dt. But Dr. Xu was on the money. We’ll calculate v with Bernoulli’s Equation, which simply expresses the law of conservation of energy for flowing fluids. As an aside, one of the common uses of the Bernoulli Equation is to explain how airfoils work — which has some problems.

This looks nasty, but it’s really quite simple. The first term on both sides is just the pressure. The second term is the kinetic energy of the fluid. On the left-hand side, we’ll let this be zero since liquid in the bottle is not moving relative to the bottle. This lets us solve for the exit velocity, v, of our champagne.

With v we can also calculate dm/dt. All we need to know is how much mass is passing a point at the bottle’s opening at any given time. That’s just the density of the gas times the cross-sectional area of the bottleneck times v. Presto.

If we make some assumptions, we can calculate F no problem. Here are the numbers Dr. Xu suggested. Bottled Champagne is under six atmospheres of pressure, while the atmosphere is (unsurprisingly) under one atmosphere. The density of Champagne is close to that of water — 1,000 kilograms per cubic meter. And the bottle neck is 25 millimeters in diameter.

“Using these assumed numbers, I get a thrust force of 15.6 Newtons,” Xu wrote in an email. If you remember high school physics you know that a Newton is the force required to accelerate 1 kilogram of mass at 1 meter per second per second. But, Xu says, “That’s not a really useful quantity to think about. Instead we can look at the momentum carried by the bottle at impact.”

Momentum is a nice and concrete quantity for our purposes because it captures the “oomph” — and the “ouch” — of an impact better than force. But unlike force, momentum doesn’t have a conveniently named unit; it’s just measured in kilogram-meters per second or kgm/s. You can see from the units that momentum just equals mass times velocity.

More numbers from Dr. Xu: “A 750 milliliter wine bottle is about 0.9 kilograms, and 750 milliliter of water/Champagne is 0.75 kilograms.” From this we can deploy good ol’ Newton’s second law, F = ma, to calculate the acceleration, which turns out to be 9.45 meters per second per second.

“From the video it looks like the bottle hit the guy ~0.5 seconds after hitting the object and turning into a rocket,” Xu wrote. Assuming the initial velocity is zero, “then after 0.5 seconds the bottle hits with a velocity of 4.73 m/s. Let’s say the bottle loses some liquid in that time and has only 1.5 kilograms left. The momentum at impact is thus … 7.1 kgm/s.”

Well, that’s all very well and good you say, but how do I make sense of that? Don’t worry, Dr. Xu’s got your back.

More like this
Science
Jan. 28, 2023
This concept spacecraft could swiftly send a one-ton spaceship to the edge of the Solar System
By Matt Williams and Universe Today
Science
Feb. 5, 2023
What Mysteries is the Universe Hiding from Us? A Cosmologist Weighs In
By M. Mitchell Waldrop and Knowable Magazine
Science
Jan. 29, 2023
Does the Doomsday Clock actually mean anything? Experts weigh in
By Jon Kelvey
LEARN SOMETHING NEW EVERY DAY.
Related Tags
Share: