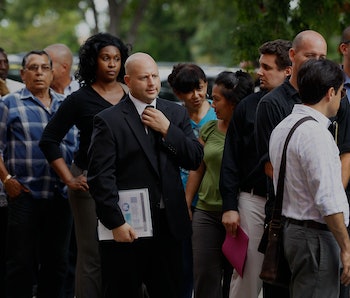 In early November, two Princeton economists released a study on health and mortality rates in the United States over a 15 year period. Surprisingly, mortality rates had fallen across every racial and age demographic group aside from one: middle-aged whites. In particular, middle-aged white people with a high school education or less saw a rise of almost 22 percent since 1999. The increase was so sharp, it raised the overall death rate for all middle-aged white Americans.

The study sent shockwaves through the academic community, but perhaps even more unexpected was the outpouring of sympathy and support the article generated; in an era where online comments sections are the textual equivalent to a toxic waste dump, the compassionate responses were so overwhelming, they warranted their own follow up article. Readers posted hundreds of comments, sharing their own experiences, relaying similar troubles of friends and family members, and generally offering empathy and understanding.

Particularly noteworthy is how these deaths occurred: the bulk of the increases are driven by alcoholism, drug addiction, and suicide. Across all groups, deaths of these types tend to be linked to depression often brought on by poor health and/or dire economic conditions. While the publishers of the study say they cannot fully account for the cause, it isn’t difficult to theorize why this particular demographic is suffering at accelerated rates.

Since World War II, a particular blue-collar version of the American Dream has held that anyone willing to work hard and stay out of trouble should be able to lead a stable, perhaps even comfortable middle-class life. It’s the kind of America that Bruce Springsteen or Bob Seger sang about: get up in the morning, bust your ass at the factory, buy a house, support a family, and do a little fishing on the weekends. Repeat for 30 years, and boom, you have a nice retirement, grandkids, and more fishing if you’re lucky.

That dream has eroded over the past 40 years, bottoming out almost entirely after the economic collapse in the mid-2000s. Blue-collar jobs, especially middle-class blue-collar jobs, have been disappearing at a steady rate. And even then, wages and benefits have stagnated or decreased compared to a sharp rise in cost of living expenses. It’s a tough trap: making too little for a mortgage payment, higher education, or health care, but making too much income to receive any sort of financial assistance.

Even for those positions, an influx of younger, more educated workers now forced to compete for those positions means the likelihood of older workers — those at the top of the pay scale, but too far away from retirement (if their retirement savings hadn’t already vanished in a puff of smoke) — are likely to be replaced by younger workers who will theoretically work more efficiently for less pay. For middle-aged workers, the loss of financial security comes with the knowledge that their most productive years are past them.

The result is that, regardless of age, race, or gender, unemployment and underemployment are literal killers. Studies going back to the 1960s link financial stress to everything from alcoholism to heart disease. The harder things get financially, the more health problems you’re likely to have. People unemployed for six months or longer are twice as likely to develop clinical depression or crippling anxiety disorders.

The stress of financial problems is far too often compounded by things like lack access to medical treatment, poor diet (inexpensive food is rarely healthy food), and turning to less than healthy “stress-relief” behaviors like smoking, drinking, and gambling. The more health problems, especially true for workers past 50, the harder it is to get back into a workforce; studies show, the longer a person remains out of the job market, the harder it is to get rehired. Unemployment literally begets unemployment. It’s a cycle that often continues until that cycle ends in a full-on downward spiral.

So as a society, are we finally ready to acknowledge that unemployment and underemployment are not just economic indicators, but issue of health and mortality?

It’s important to point out that while middle-aged white mortality rates are rising, they are still well under mortality rates for blacks with similar education. Not coincidentally, while unemployment rates have skyrocketed for middle-aged whites, blacks of the same age group are almost twice as likely to be unemployed. The point being, the academic shock and outpouring of sympathy regarding the Princeton study is a good thing, but it might be less a function of the correlation of unemployment to health and mortality — as noted earlier, the evidence has been documented for over half a century — but rather to whom it correlates.

Heroin addiction has started to become a “problem to be cured” rather than a “crime to be prosecuted” now that heroin is a drug of choice for middle-class white kids. Perhaps tagging “middle-aged white people” to the known link between financial stress and mortality might signal a change in our approach to how we tackle unemployment. Perhaps it might even start to change how we view the unemployed; seeing them as unfortunate folks that could use a little compassion as opposed to no-good layabouts deserving our contempt.

The frustration over when people decide a problem becomes a problem worth solving notwithstanding, nobody should die prematurely due to not being able to find a job. Nobody. Ultimately, any way we can prevent that from happening, from anyone it happens to, is a good thing.