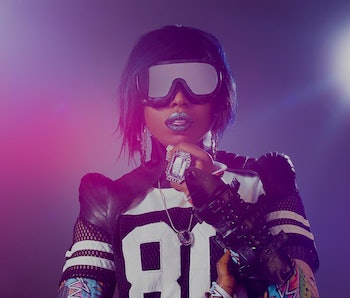 Finally, the Missy and Pharrell track that has been hanging around since last month — in snippets — has been realized in full, and with a suitably batshit, decadent video treatment. There are marionettes, Missy and Pharrell, glittery street wear beamed down from another galaxy, and plenty of rapidfire rug-cutting of an indescribable nature. In other words, it’s a Missy Elliott video.

There’s no doubt this song — with its beat coming off like Timbo for the modern, trap-and-dancehall-acclimated rap fan, and Missy’s catchy, stuttering phrasing — could be a Top 40 hit. It gives old fans just what they want, without ignoring what’s been working about recent hip-hop and R&B. It’s her first solo drop since 2012.

Here’s hoping for a legitimate Misdemeanor comeback — and with that, maybe a return to swaggier, less “Happy”-flavored form for Pharrell (remember? this guy can also rap really well).