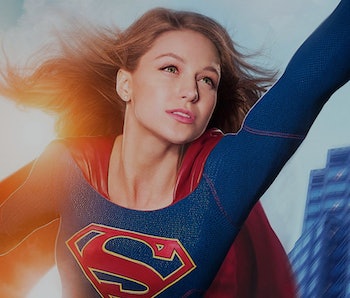 Supergirl’s biggest problem is Superman. As the voiceover prefacing each episode denotes: she’s Kara Zor-El, and yeah, she knows you know her cousin and wants to remind you that this isn’t a Superman spin-off. It’s about her experiences coming to grips with power. If that’s the case then why is his lingering presence constantly looming over her like a protective lycra-dad? Three episodes down and the legendary Man of Steel continues to flirt, all coy, without delivering the goods. He’s got to go.

This week Clark Kent helped save his cousin’s life. We didn’t see any of his bravery, as usual, because the show has a point to make — this is Kara Danvers’ story. She herself insists on going it alone, that she can manage heroic responsibility just fine flying solo. She’s headstrong and she should be, but what’s the point in dragging Superman into her character development? Even the show is aware of this! Supergirl flat out explains the hypocrisy. Her cousin dealt with everything on his own, without anyone to call on, so she should be able to do the same. Writers — heed your own advice.

Is it the show’s fault that audiences are familiar with Superman’s story? No. But there are ways of muting his legend — avoiding comparisons between he and Supergirl at every opportunity would be a strong start.

Our mainline to all things Superman began in the pilot. It introduced James Olsen after his recent exit from Metropolis, a surefire way to start a friendship between he and Kara. Were it not for his alliance with Clark Kent, the show’s Scooby Gang (Kara, James, Winn, and Alex) would be at a loss for a Supes connect. He’s a handy expositional tool for Kara’s abilities and double duties as a love interest.

I’m not against Kara getting some action, but let’s not forget: it was James who ushered in most of the nods to Superman. The iconic shot of him blazing a trail through a vanilla sky? Posed. The mystery of how he maintains his secret identity? Because people don’t want to believe in heroes. The damage his battles caused? It’s acknowledged by local businessman Maxwell Lord and later discussed between James and Kara. Every one of those mythologised elements of Superman’s own history are brought into this story to serve as a foundation for Supergirl to explore her new identity. She ruins the city with an oil spillage. She gets her photo snapped by James. She engages in an interview with her own boss while dressed up as Supergirl and her employer has zero idea that they’re the same person. It’s like watching Superman’s story recycled in a gender blender.

The show wants its Supergirl to be independent. But to showcase her independence it leans on the contrast provided by a secure, stable hero like Superman. And here’s the real kicker: we still haven’t seen his face! Could be there’s a rights issue at stake or a simpler matter of not wanting to perplex audiences months before Batman V Superman hits theaters. Whatever the cause: Superman needs direction. He’s either all in, a fully-realised member of the supporting cast, or he’s all out, mentioned in passing.

None of this half-baked “he’s in the episode, but he’s not really” business. If it were up to me, I’d give him the boot. In “Fight or Flight” Supergirl defeated a baddie that Superman never could. The show doesn’t need him and Kara really doesn’t need him. Or his uninspired pep talks over IM.

More like this
Entertainment
Feb. 2, 2023
7 DC Movies and TV Shows We Won't See Under James Gunn
By Eric Francisco
Entertainment
Jan. 25, 2023
Rick and Morty can survive without Justin Roiland
By Dais Johnston
Entertainment
15 hours ago
How The Last of Us Episode 4’s Ending Sets Up a Tragic Subplot — With a Twist
By Dais Johnston
LEARN SOMETHING NEW EVERY DAY.
Related Tags
Share: