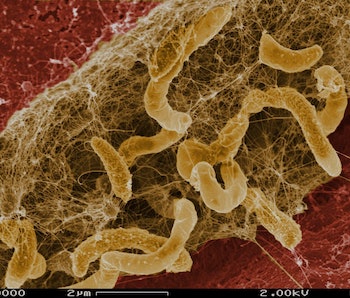 A team of medical researchers has discovered something new and surprising about the structure of bacterial infections that could lead to more effective antibiotic treatments. The findings are applicable to many different types of infections, including those that eventually cause death for people with cystic fibrosis.

What it is exactly that they uncovered is pretty complicated and technical, so we’ll let Paul Bollyky, Ph.D., one of the senior authors of the study describing the discovery, explain it using a termite metaphor.

(First, here’s what we already knew: Many bacteria form biofilms, which are structures made up of long chains of molecules as well as the bacteria themselves. Biofilms are really tenacious and stubborn once they form, and they get stuck to whatever surface it is they are infecting. A common example is the plaque that forms on your teeth.)

OK, take it away, Dr. Bollyky:

“The vast majority of infections that people get are actually associated with these so-called biofilms,” Bollyky tells Inverse. “When bacteria colonizes, for example, my bladder or my lungs or my heart valve or a catheter that’s in my body or something like that, it lays down a layer of slime — essentially a home that it uses to stick to these surfaces and cause infection.”

Here’s what we thought before, that turns out not to be entirely true: “The assumption has always been that biofilms are sort of like gypsy caterpillar nests or spider silk or something, where they spin it out and they make it,” says Bollyky. Also, “most of the scientists that study these things think of them as like, basically, dust bunnies or hairballs — they’re just a mass of interwoven polymers.”

Instead, biofilms are a lot like a termite mound — they have a complicated, organized structure that makes them particularly resistant to destruction. Also, they incorporate material from the world around them in the building process.

What we didn’t know until now is this: Bacteria and viruses are in cahoots to build these tenacious biofilm structures, which is surprising because viruses are usually considered enemy to the bacteria they infect. Also, the virus-infected-bacteria (called bacteriophages or phages) take polymers (including your DNA) from the environment around them and organize them into crystal-like structures.

This helps explain how biofilms form and why they’re so tough to penetrate. “In the same way that a diamond is forever — a diamond has this structural configuration that makes it incredibly stable and durable — we think that these biofilm are assembled by bacteriophage, and they’re also crystals, which is totally counterintuitive,” says Bollyky. Imagine an ice crystal spreading across the surface of a still lake:

“It’s like we figured out on a structural level, on an architectural level, how termite mounds are made, and that’s going to enable us to take them apart,” says Bollyky.

Fighting biofilms with antibiotics is a bit like fighting a termite infestation by only killing the termites you see outside of the mound, he explains. “You can take your shoe off and smash a couple of termites, but once they’re in the termite mound, you’re sort of out of luck. The same goes for biofilms: They are really, really resistant to antibiotics.”

The hope is that new treatments can be developed that either target the bacteriophages that are implicated in building the biofilms, or the crystal structure of the biofilms themselves. Bollyky and others already have a bunch of ideas they are testing out toward this end.

About half of clinical infections, accounting for billions of dollars annually in health-care costs, might be better targeted by this sort of intervention, says Bollyky. That’s great news, in particular for anyone who’s known anyone who has suffered from cystic fibrosis.

Cystic fibrosis is a genetic disorder, and people who have it produce thicker-than-normal mucous in their lungs and digestive tract. This thick mucous is a great host for biofilms, and it’s eventually these bacterial infections that clog up the lungs of people with CF, impeding their ability to breathe. “It ends up being kind of like concrete,” says Bollyky.

While better interventions have dramatically increased life expectancies for people with cystic fibrosis, it’s still a grim and ultimately fatal prognosis. People born with cystic fibrosis in 2010 are expected to live less than 40 years on average, with their quality of life compromised by the constant struggle of fighting chronic infections.

“We think that we’ve discovered a component of these infections, and what causes biofilms, that people really didn’t know about before,” says Bollyky. “And that’s exciting because anything new we can learn about this disease gives us something else to target.”

More like this
Mind and Body
6.17.2022 10:30 AM
Anti-aging skincare: Experts explain 3 science-backed treatments
By Szu Shen Wong, Neil Grazier and The Conversation
Mind and Body
6.15.2022 7:51 PM
A single gene could stump a deadly parasitic infection
By Allison Parshall
Science
9 hours ago
Letting your cat go outside could spread “life-threatening” parasites — new research
By Amy Wilson, Scott Wilson and The Conversation
Related Tags
Share: